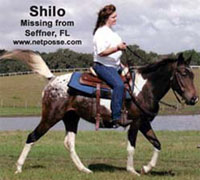 Over the past several months, residents of southern Florida have been on alert for horse theives who are taking horses from their pastures and butchering them for their meat. The recent theft of five horses from a pasture in Seffner, which took place on Labor Day weekend, has the owners worried that their horses will meet the same fate.

Though neighbors saw the theft taking place, they did not realize that the people taking the horses were doing so without permission from the owners.

The thieves pulled up a fence post, cut the fence and released two horses of their own to help them corral eight others that were grazing in the pasture. The thieves then drove through the fence, loaded the horses, came back through and re-tied the fence to make it look like the fence was still up.

The incident took place in the 7400 block of Williams Road on September 5, 2009. Two men, one described as tall and slender, the other chunky with a goatee, worked with a heavyset blond woman as they talked with a neighbor who didn’t know they were stealing the horses.

The thieves were able to drive away with five horses, two of which are listed with Stolen Horse International, aka NetPosse.com., in a truck described as a new model maroon Dodge dually. It was pulling a green combo stock trailer which may have a white canvas top.

Sundance, a 1,300-pound palomino gelding and Shilo, a brown Paintaloosa mare with four white stockings were stolen from a family living in Lutz, FL. Shilo, also has white in the front half of her body a blanket with small brown spots on her rear.

An IDAHO Alert has been issued for Sundance and Shilo with a link to a customized webpage and flyer that can be printed at www.netposse.com. NetPosse.com asks people to post the flyer at tack and feed stores, auction barns, restaurants, and convenience stores; in short, anywhere that area people, and potential witnesses, congregate.

Authorities also say a dark brown Shetland pony stallion with a flaxen mane and tail, a blue roan Paint mare with large dark spots and a dark bay mare with an injured hip and a limp were also stolen.

In a note sent to Stolen Horse International, an unconfirmed tip stated that the truck, trailer and horses were seen traveling in the Miami-Dade area.

The remains of 17 horses have been found since January in Miami-Dade County, many slaughtered and abandoned on or near rural roads. In May, two horses were found in a field in Miramar. This week another horse was found butchered in his stall on a ranch in Miami Gardens, Fl. None of the cases in either county has been solved.

Click here for more information on Sundance and Shilo.