The International Olympic Committee (IOC) has elected Rio de Janeiro, Brazil, as the host city of the Games of the XXXI Olympiad in 2016 during its 121st Session in Copenhagen, Denmark. From USEF. Read more >>

South Florida is seeing a jump in the horse meat market as restaurants quietly serve up the illicit fare, butchers provide it to trustworthy customers and police officers find slaughtered horse carcasses on roadsides. From USA Today. Read more >>

Bookmakers have installed £100m wonder horse Sea The Stars as second favourite to land another prize – the Irish Sports Personality of the Year. From BBC News. Read more >>

A horse of a different color: Exploring equine therapy

Clarence Simpson watched from a chair as two horses galloped around the perimeter of the arena. From Amarillo.com. Read more >>

The United States Dressage Federation (USDF) is pleased to announce that FEI dressage judge and rider, Anne Gribbons, will be speaking at the 2010 USDF/USEF Young Rider Graduate Program in West Palm Beach, FL, from January 16-18, 2010. From USDF. Read more >> 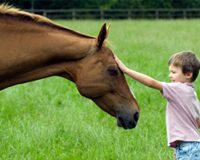