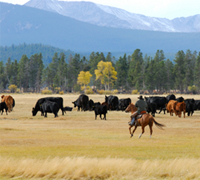 Any ranch that has five or more American Quarter Horse mares used to produce horses for ranch work and is a member of AQHA is eligible for this award.