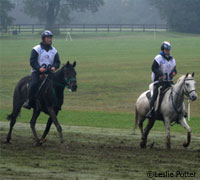 After a day that tested the will and stamina of some of the world’s best endurance athletes, it proved to be a clean sweep of the medals podium in both the two-star and three-star endurance competitions in the 2009 Kentucky Cup Endurance race. The event, held at the Kentucky Horse Park and neighboring farms, served as the test events for the 2010 Alltech FEI World Equestrian Games. In the 100-mile ride (which was shortened to 75 miles due to inclement weather and deteriorating conditions), it was an all-American medals haul. The riders from the United Arab Emirates (UAE) were dominant in the original 75-mile effort, taking the Gold, Silver and Bronze home.

Former World Champion and longtime endurance athlete Danielle McGunigal, 38, led the pack aboard Gold Raven in a final ride time of 06:30:41 to handily claim the Gold. Some 20 minutes behind her in final ride time was Iowa’s Ellyn Rapp, 27, and Berjo Smoky to pick up the Silver medal. And the competitions’ senior rider, 69-year-old Jan Worthington and her Golden Lightning, crossed the finish line nine minutes later to win the Bronze medal. In addition, her mount won the coveted Best Condition Award.

McGunigal’s mount, an eight-year-old grey Arabian mare, was tough and defiant against the very challenging atmosphere presented to her. The rider was quick to comment on just how strong and promising the horse is and how equally strong is the mare’s will.

“Raven is unique, and I’ve competed two of her sisters. They are very tough and really put their teeth into the work they are doing and get it done,” she said. “Sometimes she can be such a bully. She will push you around the [vet] check, and she knows what she wants and can be difficult. But, at the same time, that is what is great about her is that she is difficult.”

Even with such formidable assistance, McGunigal held no punches in her estimation of what each horse-and-rider combination faced during the race.

“I don’t really know what to say other than it was probably the most difficult ride I’ve ever done because of the weather and the mud,” she admitted. “If we had had nice weather, it would have been fantastic. But, with the mud and the rain and cold, it was just almost like swimming uphill with a hole in your paddle.”  Temperatures never left the 40s and a persistent rain pelted the course from before dawn straight through to the very end. McGunigal of Fort Valley, VA, began her competitive racing career at age eight, and she won her first national championships at the age of 10. She first became a member of the U.S. team at 15.

“I’m hoping next year we’ll have beautiful weather, because it will be a really great track,” she said. “I was disappointed when they shortened the race…but at the same time I was glad because I’m not sure how many horses could have really accomplished this.  They get sour, too, just like us.”

Joe Mattingly, Chair of the USEF Endurance High-Performance Committee, spoke to the effects of the weather on the event itself.

“There was a 48% completion rate, and that’s a tough completion rate,” he began. “You always want as many horses to complete as possible, but changing the distance of the trail at least helped us to maintain a successful completion rate, which was very tough. We had a lot of horses that finished the ride that looked really well, but we also had some horses that didn’t finish, and they probably would have but the course was intense with mud.”

Silver medalist Rupp, of Dubuque, IA, agreed. “It was really tough, and with each loop it kept getting worse and worse out there. It started to get dangerous.” Her partner, Smokey, is a 14-year-old Arabian grey gelding.

“There isn’t a horse I have had or seen that can hold a candle to Smokey. He is getting better every time we take him out,” she said. “He’ll never quit on you and gives 110% every time. I don’t train him, Jeremy [Olson, owner] trains him, and he is very hard to handle. He hates people. He tolerates me riding him at the rides only. I have a special bond with him and he’s gotten me very far. He’s absolutely amazing.”

Bronze medalist and owner of the Best Condition competitor, Worthington echoed the sentiments of her fellow competitors.

“It was one of the hardest rides I’ve done in my life, and I’ve done a lot of rides,” she said. “The mud was so bad and the cold and the rain. I’m not sure any horse would have been able to finish that ride.”

Scales Mound, IL, is home for Worthington and nine-year-old Gold Lightning, whose physical conditioning was evident and worthy of his award.

“It was a surprise even though I know my horse is nice and sound,” she said. “He looked so smooth and consistent.  We call him Leon, and he is a unique horse in that he was very shy and didn’t like people at all. You couldn’t catch him or do anything with him. And now he has become a very ‘people horse.’ Whatever you want to do with him is fine with him.”

Emmett Ross, who has lived in the Middle East for a decade and watched, firsthand, the sport of endurance grown and change, served as the Competition Manager. The decision to reduce the length of the event was universally agreed to be the smart, and prudent, thing to do.

“Those things are made by a group decision starting with the President of the Ground Jury.  The course was deteriorating very fast. Horses were slipping and there were a lot of low level lameness being reported,” he said. “At the end of the day, our motto is ‘for the welfare of the horse.’ We just had to make that decision, and it was a good decision.  It just kept raining.  It just wasn’t proper to have a horse do it.”

HE Sheikh Majid bin Mohammed Al Maktoum, son of HH Sheikh Mohammed bin Rashid Al Maktoum, ruler of Dubai, was the winner of the CEI** event in a ride time of 6:05:30.

“It was amazing. This is the sport that we most love. It’s our history,” said Sheikh Majid. “The weather made it very difficult. There wasn’t any hard part, other than the ground being a bit slippery. Other than that, it was excellent. There wasn’t anything wrong or bad.”

HH Sheikh Mohammed had entered the event with the hope of competing. However, it was announced that scheduling conflicts and commitments in Dubai kept him from making the trip to Kentucky.