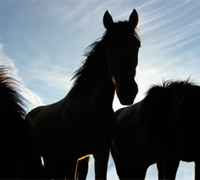 The United States Government Accountability Office (GAO) will soon be studying the impact of the closure of American equine slaughterhouses. The last American slaughterhouse was closed in 2007.

On October 21, the president signed the Agriculture, Rural Development, Food and Drug Administration, and Related Agencies Appropriations Act, 2010 (H.R.2997). The primary purpose of the bill is to designate funding for The United States Department of Agriculture and related organizations. The bill, now Public Law 111-80, contains some important points related to horse welfare.

Section 744 continues the prohibition of USDA spending on inspection of horsemeat in the United States. Though there are currently no equine slaughterhouses in the country, this provision would apply if a company moves forward on constructing a new slaughter plant. When American slaughterhouses were operational, the primary market for the product was in parts of Europe and Japan, where horsemeat is an ingredient in some local specialty dishes.

Earlier this year, a Montana law sponsored by Republican Representative Ed Butcher cleared the way for the construction of an equine slaughterhouse in that state. He is currently seeking Chinese investors to operate the facility, though it is uncertain how the meat will be sold legally without USDA inspection as that inspection is required of all meat produced in the United States, regardless of where it is sold.

Furthermore, new European Union laws require any horse sold for human consumption to be identified as “intended for slaughter.” This means they must not have been treated with any chemicals, such as dewormers or non-steroidal anti-inflammatory drugs, or undergo a 180-day quarantine. The new EU law is expected to impact the market for American horses as meat animals.

One of the primary arguments of the pro-slaughter movement is that the closure of horse slaughter plants in the United States has directly contributed toward increased neglect and abandonment of American horses. A senate report accompanying H.R. 2997 directs the GAO to conduct a study on the current state of horse welfare in America as it relates to the end of the domestic slaughter industry. The study will specifically examine how horse welfare, horse rescue organizations, farm industry income, and overall horse sales, imports and exports have been affected by the slaughterhouse closures.

Results of this study are expected by March of 2010.