Colorful, creative benches will appear again on the streets of Frankfort in the summer of 2010 as part of an effort to beautify the community for tourists attending the World Equestrian Games. From The State Journal. Read more >>

Last weekend at the Pinetree Combined Driving Event, all eyes were on the two four-in-hand drivers hoping to make the cut for the 2010 Alltech World Equestrian Games. From The Pilot. Read more >>

BHS Chairman Patrick Print FBHS has written to FEI President, HRH Princess Haya, to demand an investigation into the circumstances surrounding the apparent distress of Patrick Kittel’s horse at Odense earlier this month, and into the ethics of rollkur more generally. From British Horse Society. Read more >>

Following a robust response of entries from around the region, the winners of the First I Love New York Horses Art Show, presented by the 2009 Syracuse Invitational Sporthorse Tournament, were announced. From Madison County Courier. Read more >>

Federal land managers are seeking public comment on their plan to remove about 2,500 wild horses in northern Nevada. From The Las Vegas Sun. Read more >> 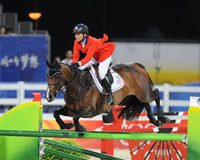