British equestrian team throw support behind Greenwich Park
Controversial plans to stage the equestrian events in Greenwich Park during the London 2012 Olympics and Paralympics have received a boost after the venue was praised by a group of British riders who have visited it for the first time. From Inside the Games. Read more >>

Children help rehabilitate rescued horses
She was the worst of the survivors from a massive equine rescue in 2003. From KGW. Read more >>

Mongolia horse meat H1N1
The price of horse meat has risen in Mongolia, as a surge in H1N1 cases and dearth of vaccines has people turning to folk remedies. From The Post-Chronicle. Read more >>

Teen, Horse Killed In Crash With Car
A 15-year-old girl and a horse were both killed in a crash with a motor vehicle. From NBC4. Read more >>

Icelandic horses strut their stuff at Freetown farm
Owners of Icelandic horses will testify that once you’ve met one of these hardy, sociable equines, you’ve made a friend for life. From South Coast Today. Read more >>

2009 International Friesian Show Horse Association World and Grand National Championship Horse Show Features Top Competition
For the third year in a row, the National Equestrian Centre in Lake St Louis, MO, was home for a week to some of the best Friesian horses in the world. From USEF. Read more >> 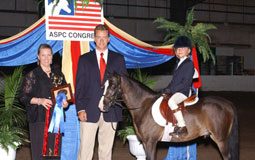