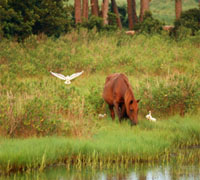 The Assateague Island Alliance has announced that the 2nd Annual Naming Rights Auction is underway. Bids will continue through November 18.

The winners will be given the right to name an Assateague Wild Foal.  The four foals will be placed in AIA’s Foster Horse Program for adoption with the names chosen by the auction winners. There are only four chances to win. The AIA reserves the right to approve names. For auction rules go to our website www.assateagueislandalliance.org.

The ponies of Assateague Island are commonly known as Chincoteague Ponies, made famous by Marguerite Henry’s classic novel, Misty of Chincoteague. However, the island is divided by a fence on the Maryland-Virginia state border, and those on the Maryland side are not called Chincoteague Ponies. The ponies live wild on Assateague Island and those on the Virginia side are rounded up once a year and some are auctioned off to control the island’s equine population. The auction also serves as a fundraiser for the Chincoteague Volunteer Fire Department, the organization that maintains the Virginia herd.

Ponies rounded up from the Chincoteague often become great children’s mounts once they have been trained. Thanks to their wild heritage, they tend to be low-maintanance animals and are typically comfortable going barefoot and living outdoors. Ponies that remain wild on Assateague Island are a popular attraction for tourists, wildlife photographers and equine enthusiasts.

To view photos of the ponies whose naming rights are up for auction, or to place a bid, visit the eBay page here.