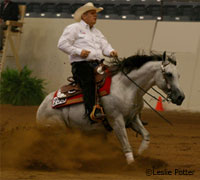 Top cowboys and cow horses will take center stage July 6, 2010 in Oklahoma City to battle it out for top honors at the inaugural Battle in the Saddle competition. State Fair Park and the American Quarter Horse Association have teamed to present this first-of-its-kind equestrian event. Battle in the Saddle, owned by Oklahoma State Fair Inc. and managed by AQHA, will be a premier equine competition showcasing five western disciplines.

Beginning July 6 and continuing through July 10, 2010, at State Fair Park, competitors will shoot it out in five fast-paced, exciting events: reining, working cow horse, roping, cutting and ranch horse competition. Open to all breeds, horses and riders will compete for their share of more than $130,000 in added money, contributing to an estimated $340,000 in purses.

The cutting, reining, roping and working cow horse classes will be recognized as AQHA special events. All breeds are welcome but American Quarter Horses competing will receive AQHA points. The ranch horse competition is open to all ranches that meet the criteria of the AQHA-Bayer Best Remuda Award.

“We are extremely proud to be a part of this inaugural event and look forward to Battle in the Saddle becoming an additional world-class equine event for Oklahoma City,” said Timothy J. O’Toole, President/General Manager of Oklahoma State Fair Inc., the organization that operates State Fair Park. “The citizens of Oklahoma City have allowed us to create one of the finest equine facilities in the world at State Fair Park. We look forward to working with AQHA to present an equine competition that will be unique and fun for the whole family.”

To add to the international flair of Battle in the Saddle and the WEG selection trial, the AQHA Youth World Cup will also take place in conjunction with the event. Youth World Cup is a team competition featuring some of the best American Quarter Horse Youth Association members from around the world. Youth exhibitors from 17 nations are scheduled to attend and compete in the 2010 Youth World Cup. Youth World Cup competition alternates between the United States and another host country every two years.

State Fair Park in Oklahoma City, often referred to as “The Horse Show Capital of the World,” is a premier equine facility that annually hosts the American Quarter Horse Association World Championship Show, the National Reining Horse Association Futurity and Derby, the U.S. Team Roping Championships, the International Finals Rodeo and many other major equine events. With more than $70 million in recent renovations and stalls available for 3,000 horses, State Fair Park has become the go-to destination for top-tier equine competitions and events.

“State Fair Park and AQHA have been partners for nearly 35 years on the AQHA World Championship Show, and we are excited to manage this new event designed to stimulate competition and fill a vacancy that existed in State Fair Park’s calendar,” said AQHA Executive Vice President Don Treadway Jr. “We’re looking forward to a premier event in a premier facility – one that will be different from others we traditionally conduct.”

Don’t miss the exciting action of this historic equine event! More information, including entry forms, will be available at www.battleinthesaddle.com. 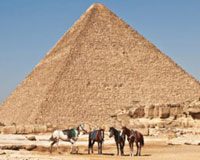