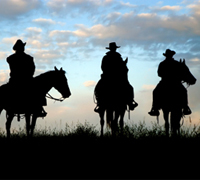 There has been an unfortunate trend towards preventing pack and saddle stock users from accessing and enjoying public lands. But individuals from Back Country Horsemen of America and its member organizations have been working together and are seeing that trend change direction.

A Win for Us All
Show Me Missouri Back Country Horsemen, a BCHA state member organization, won a major victory in the fight to protect the right to ride on Missouri’s public lands. House Bill 250 was first introduced to the Missouri House of Representatives in January of 2009.  This bill was intended to make sure that any United States resident is allowed to ride on any Missouri public land that is now or has historically been used for riding.  In May, Missouri State Representatives listened to the voice of stock users and voted overwhelmingly to pass House Bill 250.

At first, the bill met with opposition from a number of other trail user groups, including Midwest Fat Tire Mountain Biking, the Missouri Bicycle Federation, and all major mountain biking organizations in Missouri.  Their concerns included ambiguous language in the bill and the incompatibility of horses with other trail users.  Reluctance to share trails with horses is nothing new – it’s the complaint of trail users across the country, despite equestrians’ adherence to proper etiquette, safety, courtesy, and hands-on involvement with maintaining those trails.

Proponents for House Bill 250 included Show Me Missouri Back Country Horsemen, the Missouri Equine Council, Missouri Farm Bureau, and a number of equestrians and stock users.  They pointed out the need for a bill to ensure that trails that currently permit horse riding will continue to do so in the future.  They also brought to light the fact that the horse industry brings about $9 million into Missouri annually, a very good reason to make horse users feel welcome.

After it underwent some revision, many of those who opposed the bill began to support it, including Missouri Department of Natural Resources Div. of State Parks.  BCHA and SMMBCH are pleased that House Bill 250 was passed with this wording: “Access to public land owned, managed, or funded by the state of Missouri for horse and mule use shall not be denied on trails and roads that are currently designated by the state as land upon which horses or mules can be ridden, except that access can be denied where conditions are not suitable because of public safety concerns, necessary maintenance, or for reasons related to the mission of the agency that owns or manages the land so long as a written statement is posted at the trailhead stating the cause and estimated duration of the closure.  Nothing in this section shall cause horses or mules to be excluded from inclusion in the development of new trails on Missouri public lands.”

Taking Responsibility for the Land We Enjoy
Following BCHA’s example of hard work not only in the White House and various state capitals but also on the trail, Show Me Missouri Back Country Horsemen logged 5,056 volunteer man hours in 2008, maintaining and improving trails, trailheads, and campsites for all to enjoy.  That includes members driving 15,662 miles in their personal vehicles; using stock to haul equipment 38,525 miles; 252 hours of power tool use; and 37 hours of using heavy equipment.  SMMBCH’s total volunteer value for 2008 totaled $188,025.  When they see a job that needs to be done, Show Me Missouri Back Country Horsemen do it, and are glad when other trail user groups also benefit from their efforts.

An Example to Follow
Back Country Horsemen of America commends Show Me Missouri Back Country Horsemen for their patient dedication to promoting House Bill 250, which resulted in a victory not only for the horse users of Missouri, but for equestrians across the United States. As more stock users in every corner of our nation stand up for our right to ride on public lands, this kind of legislation will become more commonplace.

BCHA and Show Me Missouri Back Country Horsemen encourage every equestrian to be aware of the issues your state representatives are voting on and to look for ways to get involved with the care of the land you enjoy.  Protecting our right to ride on public lands takes a multi-faceted approach, including contacting decision-makers to express our opinion; educating the public about horse use on public lands; and taking care of the land we use with voluntary trail maintenance and low impact recreation methods.