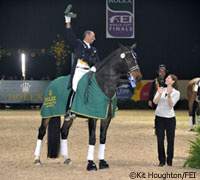 Annually, five of the USEF’s 130,000 registered horses achieve so much in a year that they are named USEF Horses of Honor and enter the running for the title of Farnam®/Platform™ Horse of the Year. In 2009 all five of these horses were nothing short of remarkable.

But one forever changed the face of his sport, and with that, Ravel was voted the 2009 USEF Farnam®/Platform™ Horse of the Year.

It began in April at the FEI World Cup Dressage Final™ when, with the weight of a nation on his 11-year-old shoulders, Ravel trotted back into Las Vegas’ Thomas & Mack Arena after winning the Grand Prix to perform his Freestyle.

The performance to music by Coldplay and the Rolling Stones brought down the house, and completed his sweep of the Final with Steffen Peters for his owner Akiko Yamazaki.

“I think it was a great year for US dressage if I may humbly say so,” said Yamazaki. “It put us on the world map, at the top.”

Reasonably inexperienced amongst the competition, the Dutch gelding never wavered in 2009, from Las Vegas to the CDIO Aachen, he proved invincible and put the US in an excellent position looking forward to the 2010 Alltech FEI World Equestrian Games, to be held in Lexington, KY next September.

Ravel is as sweet in the barn as he is competitive in the ring, he has done nothing but continue to improve in 2009 – pretty good considering his lowest finish in 2008 (his first year of International competition) was fourth at the Olympic Games.

But in 2009 he was second to no one, and those that were lucky enough to have witnessed him were simply in awe. Including his own people: Peters and his wife Shannon, Yamazaki and Ravel’s loyal groom Rafael Hernandez Carillo all went along for the ride in 2009.

“Only in America can you have a success story like this,” she said. “I would like to thank the USEF, Jim Wolf – thank you so much and Jessica Ransehousen for her wonderful coaching.”

Ravel’s rush to greatness was not a surprise to those who have known him, but it was faith rewarded. Yamazaki and Peters got to show the world just how special their horse is.

Ravel had venerable competition for the top honors:

Courage to Lead, the brave Combined Driving Pony who claimed her second USEF National Championship for Suzy Stafford and was the Individual Bronze medalist at the 2009 World Pony Driving Championships, was recognized for her achievement in her final year of competition. Owned by Beverly Lesher, the now 13-year-old Morgan mare heads to retirement and the breeding shed in 2010.

Kripton-Seni II, was another undefeated champion in 2009. This nine-year-old Andalusian stallion swept several divisions in the International Andalusian and Lusitano Horse Association’s regional and national levels. His greatest honor was achieved at the IALHA Nationals where he was honored as the High-Point Andalusian for the entire competition. Kripton-Seni II showed his versatile nature. He won ribbons in Hunt Seat, Western Pleasure and Dressage Hack in the amateur, vintage and open divisions. An overachiever across disciplines, he finished the competition with one National Grand Champion, four National Champion and two Reserve National Championship titles.

CH Our Charming Lady, the American Saddlebred Horse Association Horse of the Year and World’s Grand Champion wrote her own lore in 2009, winning the Saddlebred “Triple Crown.” She was the only one of the breed to do it last year, with champion performances at the Lexington Junior League Horse Show, the Kentucky State Fair World’s Championship Horse Show and the American Royal National Championship. The eight-year-old mare has won 34 straight classes unanimously and is owned by Jack and Donna Finch.

Sapphire, the show jumping super mare that won from Wellington to Calgary in 2009 padded a résumé that already sparkles with two Olympic Gold medals under McLain Ward. Owned by Blue Chip Bloodstock and Ward, Sapphire won the richest classes on the continent, including the $1 million CN International and the $400,000 FTI Finale Grand Prix. She was also second by the narrowest margins at the Rolex FEI World Cup Final™ in Las Vegas.

For updates, blogs and video from the 2010 USEF Annual Meeting please see www.clubequestrian.com. For information about the USEF Awards Program, click here or contact the USEF Marketing Coordinator, Melissa Davis at mdavis@usef.org.