2009 will be remembered as the year of the mare in racing. The two biggest superstars and only contenders for the Horse of the Year title at the prestigious Eclipse awards were three-year-old filly Rachel Alexandra and five-year-old mare Zenyatta. Rachel Alexandra now joins an elite club of only three other female horses that have earned the title since the first Eclipse Awards in 1971.

Rachel made a name for herself when she won the Kentucky Oaks by a record 20 lengths, leading many to speculate that she could have been a Derby contender. Her fan club grew after she beat out Kentucky Derby winner Mine That Bird to take the Preakness Stakes. She completed a perfect season of eight wins from eight starts, frequently beating the boys.

Zenyatta also had an undefeated season, winning each of the five races in which she competed. The highlight of her season came when she beat some of the top horses in the world and became the first female horse to win the Breeders’ Cup Classic.

Racing fans were hoping for a head-to-head match between the two horses, but it never happened. Rachel raced exclusively on dirt tracks while Zenyatta’s trainer opted to keep her on synthetic tracks. However, a 2010 matchup is not off the table. Though earlier in the year it seemed that Zenyatta would be retired after the 2009 season, her owners Jerry and Ann Moss have since said that she will race as a six-year-old this year. 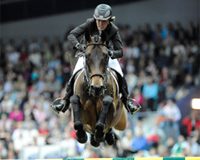