Group forming to better protect horses
The death of at least 12 horses that had been neglected on a Clermont County farm has inspired concerned residents from throughout Southern Ohio and Northern Kentucky to form an organization to prevent such tragedies. From Cincinnati.com. Read more >>

Crews Rescue Horse From Icy Pond
A horse in south Leawood is safe and sound after a dramatic rescue from the ice in a farm pond. From KMBC. Read more >>

Horse doing better after rescue frenzy
A 30-year-old horse that spent six hours in a 12-foot-deep sinkhole Monday was in a makeshift stall Tuesday afternoon, half asleep. From The Frederick News Post. Read more >>

Zoo euthanizes injured zebra foal
A Grevy’s zebra foal had to be euthanized Tuesday at The Living Desert after zoo personnel discovered the animal had a severe compound fracture in its rear right leg. From MyDesert.com. Read more >>

On Horse Racing: A rarity indeed
Mr. and Mrs. Jerome Moss gave us wonderful news last weekend when they said their champion mare Zenyatta will race in 2010 as a 6-year-old. From The Saratogian. Read more >>

Swamp fever hits Britain, threatening equine sports
More than one million horse owners were on alert last night after two British horses tested positive for the deadly disease swamp fever – the first case of the virus for more than three decades in the UK. From The Daily Mail. Read more >> 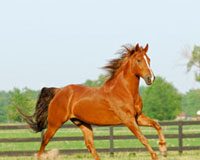