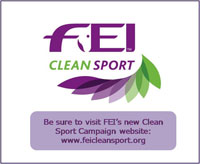 Equestrians and any interested parties can visit feicleansport.org to learn about the FEI’s campaign. The website contains information about the new regulations that the FEI is implementing this year to combat doping in equestrian sports. The rule changes and other components of the Clean Sport Campaign were approved unanimously at the FEI’s General Assembly in Copenhagen last November.

“We felt it was important to have a dedicated site where people could go to get all the information they needed,” FEI Secretary General Alex McLin said. “We firmly believe this site will raise awareness of our anti-doping efforts and increase overall compliance with the new rules when they come into force on 5 April this year.”

The site is specifically tailored to the needs of athletes, vets, officials, media and others to help them understand their roles in the Clean Sport Campaign. The site also contains details about the new Equestrian Community Integrity Unit that was a key recommendation of the Joint-Commissions to help monitor corruption, identify offenders and conflicts of interest in equestrian sports, as well as safeguard horse welfare. Members of the Equestrian Community Integrity Unit will be present at major FEI events beginning in April.

The new Clean Sport website will be complemented by the FEI’s revamped website www.fei.org which is due to be launched shortly.

Get Started in AQHA Ranch Pleasure