This year marks the 20th Anniversary of the Arizona HITS circuit and, once again, the circuit will run for six consecutive weeks beginning on Wednesday, February 3 and continuing until Sunday, March 14, 2010.

Grand Prix rider Allison Kroff has been attending the HITS Arizona Winter Circuit since she was 12 and looks forward to it each year. “It’s a excellent atmosphere in Arizona, very friendly, family oriented and personal,” said Kroff. “They always have great course designers and it’s good for young horses and Grand Prix horses. The stalls are great and the horses are very comfortable there for the circuit.”

Kroff, now 25, has had her share of Grand Prix victories over the years. Last year she rode her mount Nomograaf to first place in the $25,000 HITS Grand Prix during the Tucson Winter Classic (III), beating out Bjorn Ikast of Mexico, as well as her best friend Brandie Holloway. The pair also placed in the top four in three other Grand Prix classes offered during the circuit, earning $15,500 in prize money together.

Kroff, who trains herself and has been recently working with Canadian Olympian John Pearce, will be bringing three new horses with her to Arizona this season. “I have a new six-year-old stallion that I hope to debut and a new seven-year-old that’s almost ready for the Grand Prix level, so I’m very excited about that.”

Grand Prix riders will have plenty to be excited about this year as there’s $150,000 up for grabs at HITS Arizona.

HITS, Inc. is a special events management company primarily focused on producing hunter/jumper horse shows. Based in upstate New York in the village of Saugerties, HITS produced its first horse show circuit in Gainesville, Florida in 1982. Since that time, HITS has grown into a nationwide company with world-class hunter/jumper circuits in California, Florida, Arizona, New York and Virginia.

For more information and a complete schedule of classes and events, visit www.HitsShows.com. 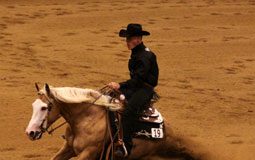 BreyerFest is under way at the Kentucky Horse Park