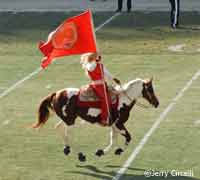 The fastest and most colorful run down the football field at Arrowhead Stadium in Kansas City this season cannot be claimed by any NFL gridiron star. Instead, that honor goes exclusively to the flashy horse-and-rider team of Chiefs Warpaint and Kansas City Chiefs cheerleader Susie Derouchey.

To the thundering applause of about 70,000 Kansas City fans at each home game, Derouchey and “Warpaint” sprinted down the middle of Arrowhead Stadium after every Chiefs touchdown and successful field goal kick. In all, more than 540,000 people at the stadium witnessed their celebratory rides for the 2009-2010 season.

Warpaint is a registered American Paint Horse and Derouchey is an active APHA member who has a long history of owning and showing Paints. In appreciation of the stellar performances by the duo, the American Paint Horse Foundation awarded its “Legendary Achievement Award” to Warpaint and Derouchey before the start of the Chiefs last home game of the season at Arrowhead Stadium.

Derouchey and Warpaint received the award at Arrowhead’s “Fan Zone,” while their faithful followers cheered and applauded the well-deserved honor. The Foundation also presented a silver APHA commemorative belt buckle to Derouchey.

“I felt like that whole day was just a dream come true,” said Derouchey. “I will forever cherish the award, the buckle and all the memories.”

It turned out also to be a busy day, with Derouchey and Warpaint making six scoring celebration runs, plus the grand entrance, for a total of seven sprints down the football field. Derouchey said she looks forward to every score, not only because it means the Chiefs are doing well, but because she can spend more time riding Warpaint.

Reviving a tradition
The appearance of Warpaint actually follows a long Kansas City Chiefs tradition of bringing a Paint Horse on the field for scoring celebrations. In decades past, a different American Paint Horse nicknamed “Warpaint,” played a similar role.

Although the most recent Warpaint was retired in 1989, he made a guest appearance during an old-timers game, according to reports, and received a standing ovation from the sellout crowd at Arrowhead.

The Chiefs decided to revive the tradition of the horse-and-rider scoring celebration in 2009—the 50th anniversary of the Chiefs’ beginning in the American Football League as the Dallas Texans. Formed in 1959 by AFL founder Lamar Hunt, the team made the move from Dallas to Kansas City in 1963.

Leading today’s charge
With this season’s revival of the tradition of running a Paint Horse down the field after successful scoring drives, fans are once again treated to the thrill that comes from seeing a dynamic horse-and-rider team perform.

Derouchey and Warpaint make their appearance before the crowd at the start of every home game when the “Warpaint” chant begins. Rushing directly onto the field from an entrance known as “the tunnel” come cheerleaders, flag bearers, and drummers. Then out of the shadows of the tunnel emerge the Chiefs’ American Paint Horse, Warpaint, and Derouchey.

“It’s the biggest adrenaline rush you could ever imagine,” said Derouchey. “It’s absolutely surreal. To have this once-in-a-lifetime opportunity to incorporate my love for cheerleading and performing in front of a crowd with my passion for horses is such a unique opportunity. I thanked God every time I got to run this year.”

The cheerleader is confident that Warpaint enjoys the runs as well.

“You can just tell when a horse is content and happy and she definitely is. When she comes out during the Warpaint chant, she’s just fun to watch. Her ears are always forward. She’s excited. She knows her job, and she just does it.”

Training camp for an NFL horse
The two people entrusted with ensuring that Warpaint knew her job this year were Brian Flynn and Kenny Fisher, both of Grandview, Mo.

Flynn said he searched far and wide for the proper horse when he was contacted by the Chiefs to revive the role of Warpaint.

“I wanted a registered Paint. That was a given,” said Flynn, who reasoned he would be more successful in finding a horse with the right conformation, attitude and proven abilities, if he started his search among registered horses.

“I was looking for a horse that had a lot of experience and had been around a lot—cutting, barrel racing, team roping, show experience, and being around crowds. The horse we found had done it all,” said Flynn, adding that the horse had also participated in parades and gymkhanas.

Out of 30 prospects, the one Flynn finally decided on got the job after a tryout on the turf of Arrowhead Stadium itself.

The 11-year-old mare performed admirably, said Flynn. They accustomed the horse to cheerleaders kicking and waving pom-poms, marching bands on the field and more.

“What we couldn’t practice was how she’d be in front of 80,000 people,” said Flynn. “But the Chiefs gave us CDs of crowd noise, and we’d take her out back of our property and crank up the sound. We even shot guns off of her. She was great,” said Flynn.

“She really has been a jewel of a find for us.”

After finding the horse in May 2009 and having only about four months to prepare the mare for her Sept. 20 game debut, Flynn sought the help of Fisher, a friend who had ridden and trained cutting horses for 30 years.

Fisher said his secret to success in training Warpaint was simple, “I spent a lot of time in the saddle with her.”

That time included trail riding, an activity that Fisher said cleared the horse’s mind and settled her down.

“I’ve been training since ’71,” said Fisher, “and I know that nothing beats just spending a lot of time with a horse.”

Chiefs Warpaint was ridden every day during the football season at Kenny Fisher Cutting Horses ranch, by Fisher himself. In addition, Derouchey rode the horse three times a week, in addition to her daily practice sessions with the cheerleaders.

“Susie’s show experience really helps in this deal,” said Fisher. “She knows how to ride and react to whatever comes at her. She’s a good hand and makes me look good.”

Team players
The American Paint Horse Association and its Foundation echoed the same sentiments about the rider and the special horse with whom she performs.

“We’ve seen Paint Horses at a lot of show venues over the years, but witnessing this special horse and this talented rider race down the football field before the roaring approval of tens of thousands of fans was both inspirational and historic.

“I suspect a lot of Paint Horse owners will become Kansas City Chiefs fans when they see that an APHA member and an American Paint Horse play such key roles on the team.” 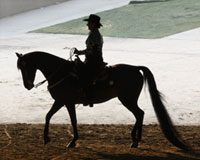