43rd Intercollegiate Horse Shows Association Nationals are Coming to Kentucky
For Derby fans, the first Saturday in May will have passed, but the scent of roses will linger, May 6-9, as the Kentucky Horse Park hosts the blossoming talents of the best college-age riders in America for the 43rd Intercollegiate Horse Shows Association (IHSA) National Championships. From USEF. Read more >>

Man helps ride out recession
Fred Marengo’s horses came to him in a variety of sad states, some malnourished, some lame and some abused. From The Times Herald. Read more >>

SPCA helping care for seized horses
Thirty horses taken from the property of Terry Sullivan are being cared for at the Mountain View Equine Hospital. From The News Leader. Read more >>

Horse put down after falling into ravine
A foal had to be put down early Monday morning after it escaped its pen and was discovered in a ravine after a crash on Elkhorn Road. From The Register-Pajaronian. Read more >>

Elmer Bandit passes away at 38
Competitive trail-riding legend Elmer Bandit, an inspiration to horse owners around the world, has passed away at the age of 38. From Horsetalk. Read more >> 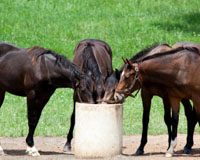