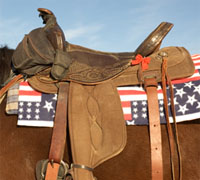 Like a classic showdown in an old western film, only time will tell which outstanding horseman will claim the Road to the Horse 2010 championship. With all three competitors strapping on their boots and stepping into the arena to give the event their best, returning competitor Richard Winters will defend his title against Craig Cameron and Ken McNabb.

Having already accomplished winning this spectacular colt-starting competition, Winters aims high with the promise to give it his best shot. Returning to the Road to the Horse arena on March 6-7, 2010 at Tennessee Miller Coliseum in Murfreesboro, Tennessee, this California cowboy says he knows the road may be longer and more difficult than before.

“With the right circumstances any one of us could win. I have a one in three chance! I know that I’d sure like to win another one of those buckles. I won’t be competing for 2nd place! Let’s see what happens,” says Winters.

Setting two precedents at Road to the Horse, Winters rode his colt in a halter during the obstacle course and freestyle portion of the competition where he also tracked a calf in the arena. Using the horse’s natural cow instinct along with his cow horse experience, he brought the audience to their feet in sheer amazement.

“Every time I step into a competition like this the dynamics change. The colts will be different, no doubt the colt that I choose will respond differently than my colt from last year. The judges evidently appreciated my particular style of horsemanship last year. I’ll try to approach my colt with the same philosophy and style in 2010 and see how it works out,” says Winters.

Spectators at this year’s event will be pulled into the action by voting for the competitor they believe has best earned the title of Road to the Horse Champion. These spectator votes will be combined with the expert opinions of the official Road to the Horse judges to determine the 2010 Champion.

Like judging any top level competition, many elements must be considered in the determination of the next champion. Included in the 2010 Souvenir Program will be a break-down of judged elements for each segment of the competition so that spectators can join in on the excitement of choosing the next heir to the Road to the Horse throne.

Returning to the arena floor, Bob Moorhouse, Jack Brainard, Toni Warvell and Marian Buehler will judge along-side Road to the Horse newcomer Eitan Beth-Halachmy. Each of the official judges lends a unique perspective the evaluation of the competition thanks to their divergent experience in the ranch horse, rodeo, reining, natural horsemanship, cutting, reined cowhorse, dressage, show jumping and western pleasure facets of the horse industry.

Road to the Horse
Road to the Horse is unlike any other event in the equine or entertainment industry. It is the original colt starting challenge. The two-day sold out event matches three of the country’s best horse trainers and clinicians of today against one another as they train unbroken colts to ride in just a few short hours in front of a packed live audience and television cameras. By combining education, edge-of-your-seat suspense, entertainment and the love of the horse, Road to the Horse has been responsible for solidifying the position of today’s horsemanship heroes and launching the careers of tomorrow’s hottest new stars. In the process, the event itself has become a catalyst for the advancement of natural horsemanship. Hosted by Rick Lamb, of RFD-TV’s The Horse Show with Rick Lamb, spectators are guaranteed not only to have a good time, but also to walk away with training knowledge that will improve their relationship with horses.

AQHA is Seeking Nominations for the Merle Wood Humanitarian Award