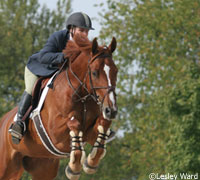 While elite riders of today are preparing for this year’s World Equestrian Games, tomorrow’s equestrian stars will be getting a taste of international competition at the 2010 Youth Olympic Games in Singapore.

Though the idea was originally proposed by the International Olympic Committee in 2001, this year’s competition will be the first ever Youth Olympic Games. The Games will run from August 14-26 and features athletes between the ages of 14-18 competing in 26 sports. Unlike the traditional Olympics, the Youth Olympics will feature show jumping as the only equestrian sport.

In another departure from traditional equestrian competition, riders at the Youth Olympics will not ride their own horses. Instead, riders will be mounted on horses provided to them by the competition. This helps to level the playing field and keep expenses in check for the equestrian athletes.

The competition horses are currently stabled and trained at Glen Haven Park in Queensland, Australia. The field of 38 horses was selected from over 100 horses tested for the event. Glen Haven’s staff of trainers, riders and grooms is helping to prepare these horses for this summer’s competition. Read more >>

The United States will be able to send one rider to be part of the five-rider North American team. The American rider will be selected from the pool of qualified riders that competed at the North American Junior/Young Rider Championships in 2009. The nomination will be made based on winnings from July 29, 2009-June 6, 2010.

Learn more about the 2010 Youth Olympics at singapore2010.sg

Buckle up with Cowboy Gear