Raffle will help Caz students to attend World Equestrian Games
A landmark event will be taking place this September and October in Lexington, KY and members of the Cazenovia College Equine Ambassadors club will be there to witness part of it. From CNY Link. Read more >>

Equestrian center in Powhatan provides veterans with therapy
Steven Williams survived two deployments to Iraq. He saw the worst that war has to offer — bullets flying at him and bombs exploding around him. From The Richmond Times-Dispatch. Read more >>

Endurance horse recovers from surgery at UT after being impaled by tree branch
Galapago Amigo has logged 700 miles in competitions and is ranked nationally with the American Endurance Riding Conference, but the gelding’s most heralded performance may be his comeback from a devastating and ghastly injury. From Knox News. Read more >>

Slaughter of horses in U.S. could resume, in Missouri
The lunge whips, the saddles and the bridles are auctioned first. Then the horses are ridden into a small pen, under the glare of overhead lights. From The St. Louis Post-Dispatch. Read more >> 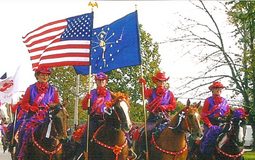