World Equestrian Games expected to be an economic engine with plenty of horsepower
If the Alltech FEI World Equestrian Games hold exactly to budget, the event at the Kentucky Horse Park in Lexington will show a profit of $52, according to Jamie Link, head of the local organizing committee for the games, which represent world championships in eight horse sports. From The Louisville Courier-Journal. Read more >>

Rachel Alexandra’s Security Guard Is Also Pursuing Ph.D.
It started with an ad on Craigslist, and has led to moonlight yoga sessions in dusty barns on racetracks from here to New York. From The New York Times. Read more >>

Inside move propels Zenyatta in Santa Margarita
Unable to make her patented outside move from the center of the track, unbeaten two-time champion older female Zenyatta looked to be boxed in turning for home and in jeopardy of losing for the first time on Saturday in the $250,000 Santa Margarita Invitational Handicap (G1) at Santa Anita Park. From Thoroughbred Times. Read more >>

Rachel Alexandra Loss Imperils Showdown
This was supposed to be an exhibition for Rachel Alexandra, an opportunity for the reigning Horse of the Year to take a lap before an adoring public. From The New York Times. Read more >>

Carriage Horses Have Their Day at City Hall
Manhattan’s carriage horses may soon get an annual five-week vacation and safer working conditions, while their drivers receive a 47 percent pay raise – their first increase in more than 20 years. From The New York Times. Read more >>

Horse rescued after sinking into muddy ditch
A local family said their thanks Friday after one of their horses became trapped in a muddy ditch early in the morning, forcing rescue crews to pull him out with a tow truck. From Colorado Connection. Read more >> 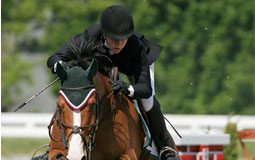