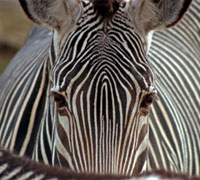 Grevy’s zebra, also known as the Imperial zebra, are the largest zebra species. They are also the oldest species and have a more primitive, coarse appearance than other types. Their narrower stripes, white bellies and large, round ears make them distinct from the more common Plains Zebra.

Grevy’s zebra are endangered in the wild. They have been hunted for their skins, which are sold around the world, and for food, though they now are legally protected by hunting bans. Competition for land with humans and livestock has also had a negative impact on the population. Currently, their habitat is primarily in the arid plains of northern Kenya and southern Ethiopia. According to the Grevy’s Zebra Trust, the wild population of Grevy’s Zebra is estimated to be less than 2,500.

Captive breeding of wild animals is often difficult, but several Grevy’s Zebra have been born in zoos in recent years. Zoo breeding programs have proven successful in the past for another equine species, the Przewalksi’s Horse. This species had been extinct in the wild but was reintroduced to its native Mongolia after selective breeing in captivity.