The 2009/2010 FEI World Cup™ Dressage season marks the 25th anniversary of the series. And what better way to bring it to a close than to see the final return to where it all began – at ‘s-Hertogenbosch in The Netherlands.  It was here 25 years ago that Anne Grethe Jensen and her light-footed mount Marzog took the inaugural title in style, and the Indoor Brabant Horse Show throws open its doors with a big welcome again this week for the ninth final to be staged at this venue.

From the outset, the concept of the FEI World Cup™ Dressage series was warmly embraced in The Netherlands. The idea for a dressage competition with a Kür to Music as a highlight was the brainchild of Joep Bartels after he watched the 1984 Olympic champions Dr. Reiner Klimke and Ahlerich demonstrate an impressive series of one-tempi changes while precisely keeping time to the Olympic anthem.  “What potential it has!” he thought, and after a strong lobby, matched by much enthusiasm from its first sponsor, the Nashua FEI World Cup was born.

German riders were not immediately eager to become involved with the exception of those present at the start, like Monica Theodorescu and her father, the late Georges Theodorescu, but music specialist Gabriela Grillo, Dr Reiner Klimke and Sven Rothenberger soon followed.

Those who rejected the idea described a World Cup with a Kür as a highlight as a competition designed to distract attention from classic dressage.  It would smother, rather than emphasise, classical riding techniques they believed, and as the first series got underway there were some extra surprises including the live orchestra used by French rider Dominique d’Esmé.

Rule changes
As the years progressed some rule changes were introduced. It is hard to believe now that the First FEI Grand Prix Freestyle test in 1986 only included twelve technical marks – collected trot and collected canter including half passes and a minimum of five one-tempi changes.

The decision of the Dressage Committee to have Freestyle as an extra decisive test in the programme of European Championships, World Championships and Olympic Games was a big step forward.  After a trial period, with separate medals awarded for the ‘Classical Tour Grand Prix and Grand Prix Special’ and the ‘Freestyle Tour Grand Prix and Freestyle to Music’, the Freestyle was clearly seen to be an attractive showcase for the sport, and therefore an essential addition for FEI Championships and Olympic Games.  Influenced by the enthusiasm of spectators, the media and television alike, it became an official part of the new Olympic schedule deciding the individual medals in Atlanta in 1996.  Another important change, made after the 2002 final, was to have the Grand Prix as the qualifier for the Freestyle test, thereby underlining the importance of the World Cup as a Freestyle championship.

Raising the standard
In 1991, Finland’s Kyra Kyrklund was crowned World Cup winner in the sixth Final in Paris riding the stallion Matador. She was so impressed by the quality of the winning Freestyle in Aarhus ten years later however that she said, with characteristic honesty and modesty, “the choreographical and musical refinement around the immortal music of the Carmina Burana of Rusty and Ulla Salzgeber is of a very high standard.  A much higher standard than my winning freestyle in Paris ten years ago.”

Not only the standard of individual winners has improved over the years – the overall standard is at a far higher level.  Minimal scores below 60% used to be common-place for the second half of the field of competitors, but they belong to the past for the last 10 years.  Almost every competitor nowadays has designed a symmetrical, logical and harmonious choreography.  Background music is totally gone and has been replaced by appropriate and expressive music which adds an essential extra quality to the performance of each horse.

More logical
Illogical movements and unexpected transitions are almost gone over the last 20 years.  Sharp movements or transitions have been consigned to history, although you can still notice a difference between Western-European dressage and a more Eastern-European style.  At the start of the FEI World Cup™ Freestyle, Russian competitors like Nina Menkova made an effort to show as many transitions as possible without giving spectators time to catch their breath. In the 1990 final for instance, Nina and Dikson did a canter-pirouette to the right in front of the Judge at C immediately followed by a canter-pirouette to the left at the same spot before finally executing the halt and salute.  Nowadays the rules stipulate that there must be at least three strides forward before a new pirouette can be performed.

In the FEI World Cup Final in Vilhelmsborg near Aarhus, Denmark in 2001, Germany’s Isabell Werth took great risks with her Freestyle transitions.  Her horse, the Hannoverian-bred gelding Antony (Argument x Wenzel I), holds the record for most World Cup appearances and it was deeply disappointing when this partnership’s planned farewell in Las Vegas in 2005 failed to materialise when the horse failed the veterinary inspection.  With Antony she was an expert in showing difficult transitions, like moving from a rigorous and forward extended canter to an immediate piaffe on the spot.

Polish physiotherapist and rider Malgorzata Morsztyn planned even more difficult and complicated transitions during the 2001 final, moving from piaffe straight into extended canter and back again, but because her horse Dionysus excels in piaffe it worked very well.

Stallions and Mares
Two stallions achieved the highest glory and were deserving of the title of FEI World Cup champions. The first was Gauguin de Lully (sired by Chagall), a double-winner for Switzerlands Christine Stückelberger in 1987 and 1988.  This horse was very expressive in his half-passes in passage, something new in that early stage of the FEI World Cup™ Dressage, and Christine has always felt that she was the first to really incorporate the movement of the horse in the music, especially in the trot and passage.  The second stallion was Kyra Kyrklund’s Danish-bred Warmblood stallion Matador (May Sherif x Wersal).  Remarkably, another son of May Sherif, the gelding Andiamo ridden by Sven Rothenberger (and before that shown by Switzerland’s Otto Hofer), won the 1990 final in ‘s-Hertogenbosch.

Very few mares competed in the FEI World Cup™ Dressage until recently. However two mares not only competed, but finished at the very top – the Westphalian-bred chestnut Fabienne (sired by Feuerschein), ridden to victory in 1992 by Isabell Werth and accompanied by a wonderful Beatles-medley, and the Hannoverian-bred Brentina, the winning ride of America’s Debbie McDonald in 2003.

Geldings win most often
Historically however, it’s no surprise to find that, just like in the other disciplines, geldings have had the greatest success.  Amongst them have been:

Record Holder
Anky van Grunsven is not only the record holder of the World Cup title, she also holds the record for the highest score ever received in an FEI World Cup™ Final – 87.75% ridden in 2006 in Amsterdam.  Anky also holds the record for the best and most varied musical scores – from the specially-composed ‘Bonfire’s Symfonie’  to the James Bond-theme, the theatrical West Side Story to the tango, and her most recent highlights l’Esprit Chanson and Dance of Devotion.  The challenge of always producing something new and exciting has been part of her secret for success.

FEI World Cup™ Dressage, the only worldwide series in this discipline, has entered its 25th season. The series, created in 1985, comprises four leagues: Western European, Central European, North American (including Canada) and Pacific (Australia, New Zealand, Asia). Each FEI World Cup™ Dressage qualifier consists of a Grand Prix test, which in turn is a qualification for the Freestyle to music competition, where league points are accumulated towards places in the Final. Judged on both technical and artistic merit, the FEI World Cup™ Dressage combines art, sport and partnership between horse and rider at the highest level and consistently proves a winning formula with audiences all over the world. 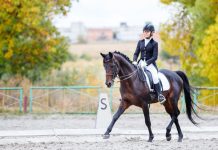