Controversial ad targets delivery of horse drugs
A controversial bill is making its way through the Oklahoma state legislature; it would allow people without a license or medical training to deliver horse tranquilizers and other drugs commonly used in date rapes and abortions. From KFOR. Read more >> 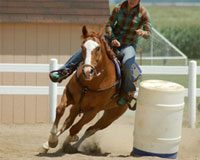