On March 18, the SPCA Serving Erie County, New York, responded to complaints of neglect at Eden Farm in East Aurora, New York. The resulting rescue is believed to be the largest seizure of animals in the area’s history with 73 horses, 53 cats and four dogs removed from the property.

According to Gina Browning of the Erie County SPCA, the horses were confined to the barns, which were reported to be in deplorable condition. Construction on one of the barns appeared to be incomplete with exposed nails and broken wood around the horses. The interior of the stalls had manure solidly packed along the floors, on the walls, and even in the horses’ water sources.

Eden Farm’s website, which has not been updated since 2008, shows healthy, well-groomed and well-bred Morgan horses. A collection of ads placed in glossy, show horse magazines from 2007 and earlier depict horses meticulously groomed and cared for.

Eden Farm’s owner/manager, Beth Lynne Hoskins, made waves in the relatively small Morgan breed in the early 2000s when she acquired more than 30 horses to launch a full-scale breeding operation. That initial herd included a coveted broodmare band and a stallion that was one of the first registered pinto Morgans, though according to the AMHA registry database he has no registered offspring. How the promising farm went from its earlier idyllic state to the conditions the SPCA discovered remains uncertain.

When the horses were taken off the property, many had severely overgrown hooves and some had minor injuries including hoof abscesses. Most had manure matted in their coats, manes and tails. Many of the horses were underweight, and fecal testing revealed worm infestations. The horses have received deworming and veterinary treatment and at this time, all are expected to recover. 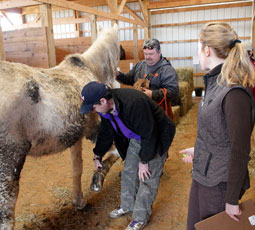 Though are no curernt charges against the animals’ owner, Browning says that they will be filed. The horses are currently at an undisclosed location where they are being cared for by SPCA staff and volunteers. The dogs and cats are undergoing veterinary evaluation at the SPCA’s shelter. Until a case comes about, it is uncertain how long the animals will remain in SPCA custody or whether they will ultimately be put up for adoption.

A grant of $10,000 was given to the SPCA of Erie County by the American Society for the Prevention of Cruelty to Animals (ASPCA) and the local equestrian community has donated many of the urgently needed farm supplies. For those interested in donating to the SPCA to help offset the cost of feed, bedding and veterinary care, a fund has been set up specifically for these horses. Donations are accepted on the Erie County SPCA’s website or by calling Bethany at 716-629-3532.