Horses given bute entering food chain, study shows
A United States study has shown that horses given phenylbutazone have been sent for slaughter, raising questions around the safety of the meat for human consumption. From Horsetalk. Read more >>

Wickenburg may be site of world record for horse line
Guinness World Records has given Wickenburg a chance to break the record for the longest line of horses. From AZ Central. Read more >>

Horsing around with nature? Big money rides on clone rules
The chestnut stallion was the love of Zarela Olsen’s life. From The Orlando Sentinel. Read more >>

Feds, horse advocates at odds over pigeon fever outbreak in captured Nevada mustangs
After a new report of disease, wild horse advocates are angered about what they say is poor care of horses in federal custody at a private holding facility in Fallon. From The Reno Gazette-Journal. Read more >> 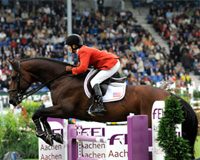