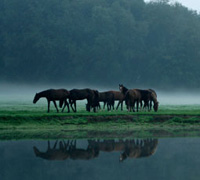 The 2010 Kentucky International Equine Summit, a biennial event to be held on Monday and Tuesday, April 26 and 27, in Lexington, Kentucky, and sponsored by the University of Louisville Equine Industry Program in cooperation with the University of Kentucky Equine Initiative, will feature more than 70 speakers and panelists dealing with challenges facing segments of the international and domestic horse industry.

The Summit, which will be held at the Hilton Lexington/Downtown, is organized as a six-day conference that takes place over only two days by having three sessions occurring simultaneously with attendees free to move among tracks. The six tracks for the 2010 KIES event are:

“The aim of the Summit is to bring experts from industry and academia together to discuss the most critical non-political issues in hope that industry leaders – officers, directors and committee members of national or state horse organizations – can use the dialogue to meet those challenges,” says Rich Wilcke, Summit chair, and director of the University of Louisville’s equine program.

A complete list of confirmed panelists by subject track follows.

A Look Back at Triple Crown Contenders