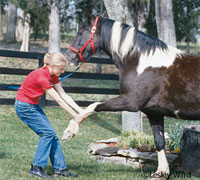 Many riders include stretches as part of their horse’s regular workout with the belief that it will help him stay supple or prevent injury. A recent study published in The Veterinary Journal shows that this practice could actually be detrimental.

Researchers at Myerscough College in Lancashire, England found that while stretching did affect horses’ movement, it did not produce consistent improvement and even hindered the range of movement in the stifle and hock joints. This goes against conventional beliefs in the horse world that suggest equine athletes benefit from stretching as part of every workout as human athletes do.

All of the horses were trotted in-hand by the same handler, and measurements were taken every two weeks, starting with the beginning of the study before the stretching treatment began. Researchers used video analysis to measure stride length and range of motion in the horses’ joints.

At the end of the study, the researchers noted that the group of horses that received six days of stretching per week had a significantly lower range of motion in the stifle and hock than the horses in the other groups. The horses that performed stretches three days per week had a higher range of movement than the other horses. The researchers noted no significant difference in stride length in any of the horses.

“These results suggest that stretching every day may not be appropriate for the horse” concludes the Myerscough study. “Stretching three days a week provided some benefit in terms of range of movement, and may be a safer option for the industry to consider.”