States Move to Legalize Slaughter of Horses for Human Consumption
In Japan and several European countries, horsemeat is a delicacy. From Audubon Magazine. Read more >>

Driver of smashed carriage wants suspect to apologize to horse
A man whose horse-drawn carriage was smashed in downtown Atlanta when a car ran into it and sent multiple people to an area hospital, wants the driver of that vehicle to apologize to his horse. From The Palm Beach Post. Read more >>

FCHS art students’ work to be displayed during equestrian games
A horse is a horse, of course, of course, and four Fleming County High School students will have their artwork displayed at the Kentucky Horse Park during the Alltech FEI World Equestrian Games. From The Ledger Independent. Read more >> 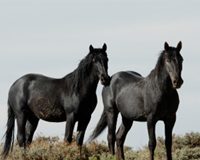