Last year’s Kentucky Derby stands out thanks to an unlikely win by a longshot named Mine That Bird. The unknown horse became only the 9th gelding to win in the Derby’s 135 year history.

The Kentucky Oaks, a race held the day before Derby day that is restricted to three-year-old fillies, brought the world’s attention to a horse named Rachel Alexandra, who won the race by a record-breaking 20 ¼ lengths. The filly went on to achieve the rare feat of beating top-level colts to win the Preakness Stakes and the title of 2009 Horse of the Year.

This year, race fans will be hoping for another good story. One filly is entered to race against a field of colts in Saturday’s Kentucky Derby. Devil May Care’s trainer Todd Pletcher is hoping she will become only the fourth filly in history to win the Derby.

The lead-in to this year’s Derby has not been without drama. The former favorite to win, Eskendereya, was pulled from the race due to swelling in a front leg. Another contender, Endorsement was pulled due to injury as well. Endorsement was a notable entry as his trainer, Shannon Ritter, was hoping to become the first woman trainer ever to win the Derby.

Keep up with the latest Kentucky Derby and Kentucky Oaks news at ThoroughbredTimes.com 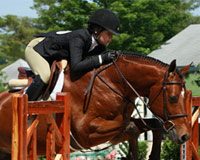