Afton man spared jail in animal cruelty case
An Afton man convicted of animal cruelty in a case that saw 41 horses, ponies and donkeys seized from his property last year was spared jail time at a sentencing hearing this afternoon in Waynesboro Circuit Court. From The News Leader. Read more >>

Could a Mini Horse Be Bred Small Enough to Fit in Your Palm?
The world’s smallest horse was born in late April on a farm in New Hampshire. Weighing in at 6 pounds at birth, Einstein appears to have beaten the previous record holder by three whole pounds. From Wired. Read more >>

Helping People Heal–With Horses
Instead of plopping on a couch and pouring out your soul to a therapist, Sharon Davern suggests stepping into this ring first. From KIMT. Read more >>

From tragedy to triumph
After graduating from American Fork High School in 2005, Cambry Kaylor headed west to California to practice for the Equestrian National Vaulting Championships. From The Herald Extra. Read more >> 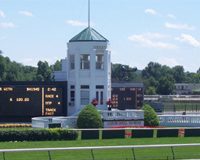