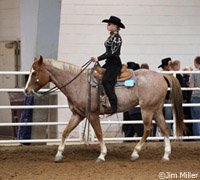 While many college and university student are currently studying for finals and preparing for summer internships, top intercollegiate riders have traveled to Lexington, Ky for the Intercollegiate Horse Shows Association (IHSA) National Championship.

Riders will compete in teams and as individuals in eight levels of hunt seat riding and six levels of western. The level of competition ranges from walk-trot through 3′ hunters for English riders and through open/reining competition for western riders.

Today the competition horses will be schooled under the observation of show officials. Competition officially begins on Thursday, May 6 with the first rounds of hunt seat riding.

The highest honor awarded to an English rider in the IHSA is the Cacchione Cup. Qualifiers compete at Nationals in flat and over-fences phases, with the final results announced and awards presented on Saturday morning. Last year’s winner was Centenary College junior Lindsay Clark. The team from Centenary also took the Collegiate Cup title for top placing in the hunt seat division. Now a senior, Clark has qualified for Nationals again in the Open Equitation classes.

For western riders, the most sought-after award is the AQHA High Point Rider Award, which will be presented near the end of competition on Sunday. The 2009 High Point Rider was Jennifer Nagel of SUNY-Oswego. Nagel has qualified for Nationals again this year in the Open Western Horsemanship and Open Reining divisions.

To qualify for Nationals, riders compete at IHSA shows within their region and qualify for their regional finals based on point accumulation. The top three riders in each class at regionals will qualify for the Zone Finals. The top two from each Zone class earn a spot at Nationals. Centenary College and 2009 western team champions from University of Findlay will both be back to defend their respective titles this year.

Read more about riding in college >>