NBC to Air Rolex Equestrian Championships Saturday, May 15th at 3 p.m. ET
After 24 prior attempts to win the Kentucky Derby at Churchill Downs, trainer Todd Pletcher finally snagged the victory he’d been waiting for his entire career. From USEF. Read more >>

Man sues Medieval Times
Apparently, sometimes it’s not good to be the king. From The Chicago Tribune. Read more >>

Northwestern students learn hands-on lesson in horse care
For Jack, it was a stroke of good luck. For students in the equine science class at Northwestern Regional School, their adoption of this sickly horse is a valuable, hands-on lesson. From Republican American. Read more >>

Back in the saddle
Picaro grazed the clover-rich lawn of Ross Haven farm yesterday morning, oblivious to all the media attention, showing no sign of the January violence that launched a recovery odyssey some say is nothing short of miraculous. From The Worcester Telegram. Read more >>

Oil foil: Put that unwanted hair to good use
Sawtooth Equine Service is collecting hair of any type to send to http://www.matteroftrust.org/for the making of “hair booms”. From Idaho Mountain Express. Read more >> 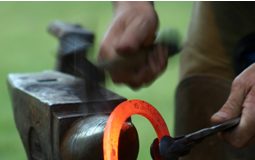