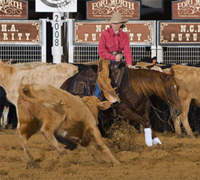 Battle in the Saddle, a new western equestrian event, has been selected as a tour stop in the National Cutting Horse Association’s Mercuria World Series of Cutting.

“The Mercuria/NCHA World Series showcases the sport’s best seasoned horses, and attracts tens of thousands of fans,” said Jeff Hooper, Executive Director of the National Cutting Horse Association. “We are excited to add a tour stop to Battle in the Saddle, itself a unique event in our industry.”

The Mercuria/NCHA World Series of Cutting began its 2010 tour in February at the San Antonio Stock Show & Rodeo and then made a visit to the Houston Livestock Show & Rodeo in March. From there, the tour will hit the following locations:

Battle in the Saddle was announced last November in Oklahoma City and is an exciting new competition owned by State Fair Park and managed by AQHA. The competition will take place July 5-10. Battle in the Saddle is open to all breeds and will feature $130,000 in added money for an estimated $300,000 in total purses. Cutting, reining, roping and working cow horse classes will be recognized as AQHA special events. All breeds are welcome but American Quarter Horses competing will receive AQHA points. The ranch horse competition is open to all ranches that meet the criteria of the AQHA-Bayer Best Remuda Award.

State Fair Park in Oklahoma City, often referred to as “The Horse Show Capital of the World,” is a premier equine facility that annually hosts the American Quarter Horse Association World Championship Show, the National Reining Horse Association Futurity and Derby, the U.S. Team Roping Championships, the International Finals Rodeo and many other major equine events. With more than $70 million in recent renovations and stalls available for 3,000 horses, State Fair Park has become the go-to destination for top-tier equine competitions and events.

For more information, or to enter, visit www.battleinthesaddle.com.

Horse and Mule Safe After Taking a Run on the Highway