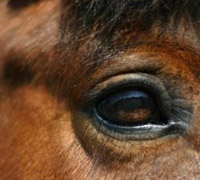 In April of 2009, police raided the farm of Ernie Paragallo, a then-prominent owner of Thoroughbred race horses and former executive at Goldman Sachs Group. They found 177 horses in various stages of emaciation and parasite infestation. Reports at the time stated that there was inadequate shelter and food on the property, and some of the horses had untreated injuries.

The New York Board of Racing and Wagering quickly revoked Paragallo’s racing license after the raid on his farm. He has remained free on bail for the past year, thanks in part to multiple delays on his trial. In March he was convicted of 33 misdemeanor counts of animal cruelty, but it was not until May 18 that he received his sentencing.

In handing down the maximum sentence of two years in jail, Judge George Pulver Jr. cited Paragallo’s lack of remorse and his insistence that the horses had received proper care, despite evidence to the contrary.

According to an Associated Press story, Judge Pulver did not mince words in the sentencing. “Your sense of integrity, your code of conduct, your perception of right and wrong, was perhaps formed by your days on either mean streets or Wall Street. Money, the bottom line, and opulence in your mind trumps morality, honesty and civility.”

In addition to the jail time, Paragallo has been fined a total of $33,000 according to Thoroughbred Times. He will also pay restitution to the equine rescue that cared for his horses after the raid.

Though some of the horses at Paragallo’s Center Brook Farm were euthanized due to malnutrition or injuries, many are now in adopted homes or at Thoroughbred retirement centers.