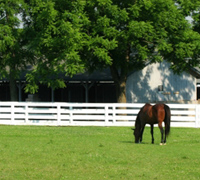 On Monday, June 7, Kentucky Governor Steve Beshear signed House Bill 398, creating the Kentucky Equine Health and Welfare Board, a group intended to help protect horses and other equines in the Commonwealth. The Board is said to be the first of its kind in the U.S. The Equine Health and Welfare Alliance (EHWA), a driving force behind the bill, hopes that the Board will serve as a model for other states to follow.

According to the legislation, the Board will, “…act to maintain the health, welfare and safety of equines in the Commonwealth.” The Board will also facilitate research into the most pressing equine health and welfare issues, develop regional centers of care for abused and neglected horses, and create a voluntary certification system for equine rescue and retirement facilities.

The board will consist of 13 voting members, including the state veterinarian, representatives from University equine programs, and a representative from the Kentucky Farm Bureau, among others.

Kentucky is known as the Horse Capital of the World, and the city of Lexington will become the epicenter of international equestrian sport this fall with the Alltech FEI World Equestrian Games. The governor and his wife, who is an active equestrian, spoke positively of the message sent by the new legislation at a ceremonial bill signing at the Kentucky Horse Park.

“Ensuring the humane treatment of all animals is a principle we must show the more than 600,000 expected WEG attendees that Kentuckians take seriously,” Gov. Beshear.

Prior to the passage of this law, Kentucky has not had a good track record on animal welfare. The Animal Legal Defense Fund named Kentucky the worst state for animal protection laws in 2009 due to its lax animal cruelty laws and enforcement. Kentucky has made the “worst five” list every year since 2006. Supporters of the new legislation hope that this will be a step in the right direction for Kentucky.

The Board is not without its critics. Anti-slaughter groups and individuals state that the EHWA is a pro-slaughter group operating under the guise of a horse welfare organization. On its website, the Animal Law Coalition states, “It is unlikely that this Board will actually promote anti-cruelty laws and other measures to promote horse welfare. The Board is simply a front for pro-horse slaughter interests that will surely recommend slaughter as an equine ‘welfare’ measure…”

The EHWA does not publicly state an official position on horse slaughter.

The legislation also creates the Kentucky Livestock Care Standards Commission, which will oversee welfare standards for livestock, including horses. The Commission’s authority will supersede any local law, meaning that Kentucky towns and cities will not be able to enforce more stringent animal care standards than those set by the Commission.