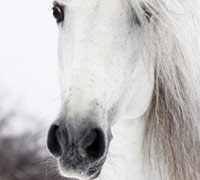 Research at the Swedish University of Agricultural Sciences confirms what riders have always known: a nervous rider or handler can cause his or her horse to become nervous as well.

For the study, horses were ridden or led across a certain distance in a familiar indoor arena four times. The study used 17 horses under saddle and 10 led in-hand. The horses and humans had their heart rates monitored during the study. In this initial phase, heart rates of humans and horses dropped on the second or third pass.

“The increase in heart rate probably means that the horses were more alert and prepared to react to any potential danger,” said Dr. Linda Keeling, the professor of animal welfare who led the study.

For practical application, this research suggests that a rider anticipating their horse spooking at something, such as a plastic bag on the side of the trail, may actually increase the likelihood of the horse spooking. Additionally, a rider with pre-show nerves may inadvertantly be causing his or her horse to anticipate danger.

The results of the study were published in The Veterinary Journal in 2009.