UPDATE 7/12/10: Mensche’s owner has reported a sad ending to his story. Her statement follows.

It is with much sadness that I have to report my Handsome Mensche was found dead in the wash today.

It appears he missed a trail turnoff, fell through an area that tripped him, he broke his back and died very quickly there after.

I want to thank everyone for their wonderful support and assistance in trying to find him. 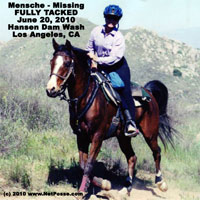 On Sunday, June 20, 2010, Jacqy Gamble’s life was turned upside down when her beloved horse, Mensche, bolted during an endurance training session in the Hansen Dam Wash. After an intense search spanning 48 hours, including an infrared flyover of the wash, there was no sign of the missing Mensche.

Mensche, a 12 year old bay Arabian gelding with four white stocking and a full blaze, measuring 15.2 hands, became missing during a trail ride June 20. The seasoned endurance horse was startled when a dog ran underneath him. Gamble became dislodged and Mensche broke free, taking off with the dog chasing him. Gamble searched the nearby area, but was unable to find any sign of Mensche. The dog’s owner reported he had come home, but the spooked equine was nowhere to be found.

During the next 48 hours Gamble and volunteers searched the Tujunga Wash at Hansen Dam but were unable to find any evidence of what happened to Mensche. On Tuesday evening, the LAPD conducted a flying infrared scan of the area to see if they could detect any signs of a large warm-blooded animal. They were unable to find anything, leading Gamble to believe that someone could have caught Mensche Sunday after he got loose.

“I would love to get my Handsome Mensche back,” says Gamble. “We have been such a good team together and making each other more complete and he has worked so hard for me, I feel I owe him a good life and care.” 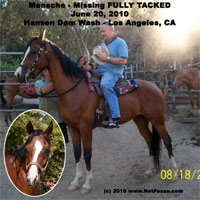 Gamble acquired Mensche in 2004 when his previous owner could no longer afford the time or money to care for him. As an avid endurance rider, Gamble immediately recognized Mensche’s potential for the sport. Endurance riding tests the mental and physical strength of both horse and rider through challenging timed courses spanning anywhere from 25 to 100 miles.

“He was being turned out once a week, and seemed to need a much larger release for his energy . . . more playtime,” his frantic owner continues, “I have had a love of endurance riding and for a horse like Mensche this worked well.”

Gamble and Mensche began competing in 25 miles rides in 2004 and have gradually moved up to the 100-mile division. In 2008, the pair began training for the famed Tevis Cup 100-mile Endurance Ride, the most difficult course in the sport. When forest fires cancelled the Tevis Cup for the first time since its inception in 1955, Gamble was forced to look for another race. With Mensche as her partner, the pair completed their first 100-mile competition, the Swanton Pacific100, in August of 2008.

“Mensche was so wonderful, he loved it! At the end of the race, I don’t know if you can give human emotions to horses, but he definitely knew he had done a great job,” recalled Gamble.

Determined to compete in the Tevis Cup, Gamble and Mensche received a second shot at the race in August 2009. The course is known for its difficulty, with less than 20% of first-time competitors finishing the race in the allotted time. With just 20 minutes to spare, Gamble and Mensche crossed the finish line and successfully completed their first Tevis Cup.

“I was so proud of Mensche,” states Gamble. “He worked so hard for me that day, I’ve felt very lucky to care for him.” 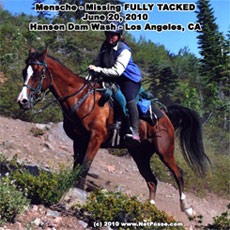 As prey animals, horses can quickly travel several miles in an hour when panicked with no real sense of direction. Mensche could still be in the area, or someone might have captured him and not know how to reach his owner, especially if he crossed a jurisdictional boundary where different law enforcement agencies might be unaware of his origin.

Jacqy and Mensche need your help! Please go to www.netposse.com, and to the California missing horse listings. Mensche’s webpage is there and anyone can print a flyer to post in area feed or tack stores, auctions barns, restaurants or convenience stores – anywhere people congregate. You don’t have to be a horse owner to help.