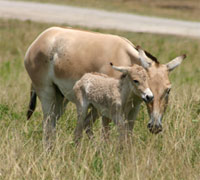 The Wilds, a wildlife conservation center in Cumberland, Ohio, recently welcomed two new equines. Two Persian onager foals were born this summer, the first on June 28 and the second on July 9, 2010. 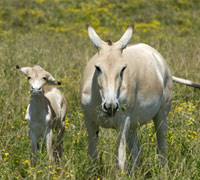 Persian onagers have never been domesticated, though there is evidence that ancient civilizations made unsuccessful attempts at doing so. Though onagers are native to a brutally hot, arid environment, they are able to weather winter surprisingly well in places like Ohio by growing a thick winter coat.

There are now only around 500-600 Persian onagers in the wild. They have suffered from poaching for their meat and hide and loss of their native, semi-desert habitat due to competition with local livestock. There are approximately 30 Persian onagers in zoos and conservation centers in North America, and near 100 in captivity worldwide. 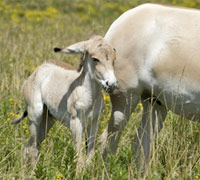 Conservation biologists at the Wilds spent three years studying the reproductive biology of onagers. The two foals born this year are the first wild equids of any species to be born using artificial insemination. One of the two foals was also the first conceived using frozen semen, a practice that is fairly common with breeding of domestic horses.

There are now 17 Persian onagers at the Wilds. Biologists hope that the continued success of breeding onagers in captivity will eventually lead to reintroduction of some individuals to their native habitat.

Kentucky Ale Will Be the Official Beer of the 2010 Alltech...