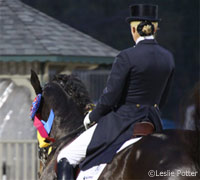 The following horse/rider combinations have been named to this Short List/Nominated Entry in the following ranked order:

The USEF Selection Trials for the US Dressage Team for the Alltech FEI World Equestrian Games took place over the last two weeks at the USET Foundation Headquarters in Gladstone, NJ as part of the Collecting Gaits Farm/USEF Festival of Champions. Tina Konyot and Calecto V swept the four Grand Prix classes to win the Selection Trial. Todd Fletterich was second with Otto and Katherine Bateson-Chandler was third on Nartan.

Steffen Peters and Ravel, who won the 2009 FEI World Cup Final and were fourth at the 2008 Olympic Games, was considered for selection and named to the fourth ranked position without taking place in the Selection Trials based these prior results according to the USEF Selection Procedure for the 2010 Alltech FEI World Equestrian Games.

The Team and alternates will be named sometime prior to the deadline for submission of definite entries on September 22, 2010.

Watch all the highlights from the 2010 Collecting Gaits Farm/USEF Festival of Champions at www.useflive.com