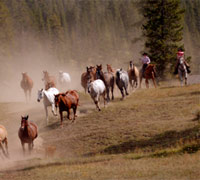 The National Cowgirl Museum and Hall of Fame is proud to announce Betty Dusek, Kay Gay, Temple Grandin, Ph.D., Joyce Gibson Roach and Hortense Ward as inductees to the Hall of Fame for 2010. All five women will be honored during the 35th Annual Induction Luncheon Ceremony on October 28, 2010 at the Will Rogers Memorial Center in Fort Worth, Texas.

The National Cowgirl Museum and Hall of Fame is the only museum in the world dedicated to honoring and celebrating women, past and present, whose lives exemplify the courage, resilience, and independence that helped shape the American West, and fosters an appreciation of the ideals and spirit of self-reliance they inspire. It is the legacy of legends.

The purpose of the Hall of Fame is to preserve the history and highlight the impact of Western women living roughly from the mid-1800s to the present: the artists and writers, champions and competitive performers, entertainers, ranchers (stewards of land and livestock), trailblazers and pioneers. Today, there are over 190 extraordinary women who have been inducted into the National Cowgirl Hall of Fame since 1975.

Kay Gay
Kay Gay is an important part of Texas rodeo history. From scheduling long-haul truckers for rodeo stock to serving as secretary to keeping time, she has filled most roles within the rodeo arena. For the Mesquite Championship Rodeo, among others, she coordinated the grand entry and opening ceremonies, carried the American flag and competed as a barrel racer. Her interest in the preservation of Western culture is evident through not only working with the Mesquite Rodeo and others, but also for taking charge of the Pivot Setters and Rodeo costumes at the Fort Worth Stock Show and Rodeo. Her work with the wardrobe often meant designing and even sewing costumes. Kay is generally acknowledged as being one who is encouraging and nurturing to all competitors and her dedication to maintaining and promoting Professional Rodeo and our Western heritage is readily seen through her life’s work.

Temple Grandin, Ph.D.
Temple Grandin, Ph.D., is a champion of the agriculture and livestock industry. Grandin has published four books and well over 200 articles and essays on the subjects of animal welfare, livestock handling, and other topics relevant to the livestock industry. Having designed the livestock facilities for six different countries, at least thirty percent of the handling done in North America is done through one of Grandin’s designs. She developed a system which causes the animal to feel minimal anxiety while providing greater safety and efficiency for the plant. Grandin overcame double adversities of being female in a male-dominated industry and the challenges associated with being autistic. She has published on the subject of autism and speaks publicly to better inform others about the developmental disorder. Grandin is currently a professor of animal sciences at Colorado State University.

Joyce Gibson Roach
Joyce Gibson Roach is an author, teacher, cattle rancher and naturalist.  Her writing credits include awards and prizes in non-fiction, short story, children’s literature, and humorous prose, all of which focus on Texas and the Southwest. As adjunct professor of English at TCU she taught the Western Novel and reintroduced Literature of the Southwest as a part of regional studies. She is a Fellow of Texas State Historical Association, Fellow of Texas Folklore Society, an elected member of Texas Institute of Letters and Philosophical Society of Texas, and is national president of Horned Lizard Conservation Society. The Cowgirls, in print since 1978, is considered the foundational text about women on horseback from ranch to arena. The family ranch, Crosswinds, is located in the Western Cross Timbers in Wise County, Texas where she has established the Center for Western Cross Timbers Studies dedicated to communicating about, and conserving the region.

Hortense Ward (1872- 1944)
Known as a defender of women’s rights and as the first woman admitted into the Texas Bar Association, Hortense Ward broke barriers for women during the beginning of the 20th century. Five years after being admitted to the Texas bar, Ward became the first woman from Texas, as well as the first woman below the Mason-Dixon line admitted to practice before the U.S. Supreme Court. Ward was the president of the Houston Equal Suffrage Association, Chief Justice of the All-Woman Supreme Court, and Vice-President of the Women Lawyers Association; she was also the first woman registered to vote in Harris County. In the 1920s she publicly supported the campaign of Miriam A. “Ma” Ferguson, the first woman governor of Texas. Ward spearheaded the Married Woman’s Property Rights law – which became known as the “Hortense Ward Act,” and allowed married women in Texas to control their own property and earnings.

About the National Cowgirl Museum and Hall of Fame
The National Cowgirl Museum and Hall of Fame honors and celebrates women, past and present, whose lives exemplify the courage, resilience, and independence that helped shape the American West, and fosters an appreciation of the ideals and spirit of self-reliance they inspire. Open Tuesday through Sunday 10:00 a.m. to 5 p.m., admission is $10 for adults ages 13 and up and $8 for children ages 3 to 12 and senior citizens. Group rates and docent tours are available. For more information please call (817) 336-4475 or (800) 476-FAME, or visit www.cowgirl.net. 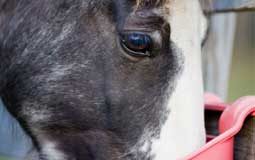 Banned substance found in some lots of Purina horse feed