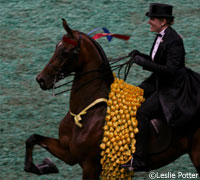 The World’s Championship draws approximately 2,000 horses and competition spans over the course of six days. The grand finale of the show is stake night on the final evening of competition. During that evening’s session, the Grand Champions are crowned in the fine harness, five-gaited and three-gaited divisions. These are widely considered to be the greatest achievements in the Saddlebred breed.

While the show is a championship for Saddlebreds, there are also roadster horse classes, which feature only Standardbreds, and a full slate of classes for Hackney ponies. The Saddlebred breed’s saddle seat equitation championships are also held at the Kentucky State Fair.

Although Saddlebred fans and supporters have been pushing versatility in recent years, the World’s Championship is still overwhelmingly a saddle seat and driving show. In 2006, the show management made the decision to add Saddlebred western pleasure classes. There are currently two western classes offered during the show. However, the breed’s official championship classes for western pleasure, as well as hunter pleasure and pleasure equitation, are held at the St. Louis Charity Horse Show in September.

The show is available for viewing via live, online streaming. Click here to register.