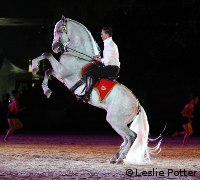 The long-awaited opening day of the Alltech World Equestrian Games was a great success. Reining heralded the games with Italian Stefano Massignan leading with his 6-year-old Quarter Horse stallion, Yellow Jersey. Clinton Anderson and John Lyons were the first clinicians to share their skills with the public. And the much-anticipated opening ceremonies played out in front of a nearly sold-out crowd.

The final dress rehearsal for the opening ceremonies was canceled on September 24th due to thunderstorms and torrential rain showers, but it was a clear and cool night for the opening ceremonies on the 25th. The event, produced by Global Creative Connection, headquartered in Lexington, Kentucky, paid tribute to America, Kentucky, and the equine world.

The show opened with dancers in a circle performing to a full orchestra while children dressed in white and with wicker horse heads on their backs danced on the edges. Six Native Americans mounted on colorful horses, rode in to deliver a traditional prayer for all nations.

Kentucky is all about bluegrass music, so it made sense that a bluegrass band should be in the house. The family band Cherryholmes played the WEG anthem Horse and Man, composed by opening ceremony creative director Peggy Stamps, while the WEG celebration troop of school age dancers and the University of Kentucky cheerleading squad performed.

The 40-horse Culver Academies trotted in holding American flags. The team of black horses performed a wheel while several horses galloped in a circle around the outside. The horses stood at attention while the National Anthem was sung by a choir and accompanied by a full orchestra.

Cherryholmes played Orange Blossom Special on their fiddles while Nine American Saddlebreds with over 40 World Championships between them wowed the audience. But it was William Shatner, driving one of his Saddlebreds, who stopped the show. Standardbreds came in racing around the outside of the arena as Steve Buttleman, the bugler at Churchill Downs, played the “Call to Post.”. Then four racehorses came in to race; Jockey Club Hall of Fame jockey Chris McCarron won.

The audience stood as five-time Grammy award winner Wynonna Judd sang My Old Kentucky Home. Then the athletes in the ‘parade of nations’ came in to great applause.

The orchestra accompanied Arabians in Western, English and desert tack. The Friesian stallion train from the Netherlands performed their famous ten-horse dressage freestyle. Muhammad Ali, Kentucky’s own and three-time boxing heavyweight champion of the world, was driven into the arena in a classic car flanked by mounted police officers.

FEI president, Princess Haya bint Al Hussein of Jordan declared the games open as Culver Academies returned with the FEI flags and performed a precision ride. The show continued as Mario Contreras on his Andalusian stallion and the Lexington Ballet performed together to West Side Story. A Friesian Roman rider galloped around the arena while two sopranos from the Metropolitan opera sang The Flower Duet by Leo Delibes.

And now, for the next 15 days, the eyes of the equine worlds are on Kentucky.

Where Did Your Love of Horses Come From?