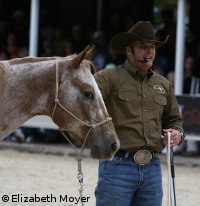 You might say the road to the World Equestrian Games begins with trailer loading. After all, if you can’t get a horse on a trailer, it won’t be very easy to get to the numerous competitions needed to qualify to be the best of the best. At the Clinician’s Corral in the Equine Village at 2010 Alltech FEI World Equestrian Games held in Lexington, Ky., Downunder Horsemanship founder Clinton Anderson demonstrated his approach to this universal problem faced by horse owners worldwide.

After a comic rendition of the many ways horse owners try and fail to push, pull, drag or otherwise coerce a reluctant equine to load on the trailer, Anderson got the audience laughing as many recognized the all-too familiar scenario. Then, he got down to work in his trademark Aussie accent, using a down to earth approach to teach horse owners how to handle the situation the Downunder way.

“Forget the trailer,” he said. “It’s not about the trailer—it’s a lack of respect” To load successfully, you need the horse’s respect and control of the feet, explained Anderson.

Once you have respect and control, you can address the trailer issue. The key to successful loading, Anderson says, is to get the horse to think it’s his idea to get on the trailer, and then to make the trailer a place the horse actually wants to be. Anderson uses a technique he calls approach and retreat to address the loading process. Next, you want to make the right thing easy and the wrong thing hard for the horse, so that he learns to look forward to being on the trailer.

The test model for the day’s demonstration was an Appaloosa mare named Bubbles who was not keen to get on the trailer. Using a rope halter, 14-foot lead line and his signature Handy-Stick, Anderson first worked on the objectives of respect and control away from the trailer as he directed the stubborn Bubbles to move forward, backward, left and right at his request with the lead line and taps from the stick as needed. When she got to close to his personal space, Anderson gently but firmly cued her to move away and yield.

To offer further insight, Anderson compared this form of direction with the way horses communicate in a herd. “With horses and horse training, whoever moves their feet first loses,” said Anderson. The horse’s feet should move, not yours. “Resistance is about not wanting to move the feet,” he said.

Getting on Board with Approach and Retreat

Throughout the process, Anderson would retreat away from the trailer as a reward and allow the horse to rest. By getting closer to the trailer and then backing off, Anderson employed a little reverse equine psychology. By removing the pressure, the horse stops worrying about being forced on the trailer and starts to get curious, he explained. 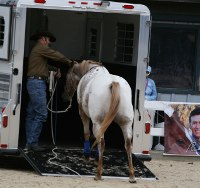 Anderson allowed Bubbles plenty of time to perform her own inspection, or “safety check” each time she offered to give the trailer a good sniff. “Don’t rush this part,” he emphasized. Anderson also removed the pressure when Bubbles started to get close to the trailer, as part of the retreat process. Using this gradual process along with the sending exercise, Anderson was able to get Bubbles easily loaded on the trailer.

Learning to Love the Trailer

In the next phase of the process, the goal was to get the horse to think the trailer was the greatest place in the world to be. Anderson allowed Bubbles to get on and off the trailer. Once off the trailer, he again directed her to move her feet—forward, backward, right and left, making it relaxing to be inside the trailer and hard work off the trailer.

“Work them outside, put them inside, and let them rest,” he said. This process also helps other trailering problems besides loading, noted Anderson, including horses that load fine but are fractious during trailering, or horses that bolt off the trailer.

Using this process, you and your horse can have “no worries” (as Clinton would say) about trailering. 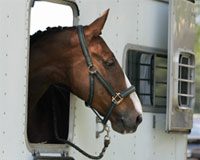