With a hint of tears at the podium, FEI president HRH Princess Haya Bint Al Hussein bid a heartfelt farewell to a stadium packed with nearly 40,000 revved spectators, competitors, volunteers, dignitaries and media on Sunday afternoon at the conclusion of the 2010 Alltech World Equestrian Games in Lexington, KY. After she declared the games a great success and officially over, Kentucky state troopers lowered the FEI flag from the pole at the main stadium at the Kentucky Horse Park in the hot afternoon sun.

After folding the flag, the officers solemnly delivered it to two mounted officers on matching grey police horses. The mounted officers marched to the stage, each holding a corner of the folded flag. After it reached Princess Haya, she passed the flag on to Laurent Beauvais, President of the Normandy 2014 World Equestrian Games. The pale blue flag will rise again at opening ceremonies to be held at the Michel d’Ornano Stadium in Caen, France.

Princess Haya and others, including Kentucky Governor Steven Beshear, addressed the crowd after thousands of volunteers and competitors paraded into the sun-filled stadium. A few of the vaulters cart-wheeled into the stadium as the lively, colorful throng filed in. Princess Haya noted some of the many “firsts” that have occurred during these games. “In Lexington we’ve seen the poetry in motion of our newest sport, para-dressage,” she said. “We witnessed the Netherland’s Edward Gal and his historic three gold-medal win in dressage – a first in World Games’ history.” She also mentioned that for the first time in Games history, an African country was represented in eventing and how Great Britain won its first gold medal in vaulting in Lexington. In total, the 2010 Games hosted 632 athletes and 752 horses from 58 countries.

“It has been an honor to have you,” said Governor Beshear. “The 2010 World Equestrian Games began with a shared passion and admiration for the horse. It ends with long-lasting bonds having been formed and a renewed awareness of the world around us.” The governor also addressed the many volunteers all dressed in light blue Ariat shirts and jackets, who have worked tirelessly throughout the 16-day competition. He suggested they get started with French lessons in preparation for the next Games in Normandy.

No horses performed during the closing ceremonies, but the celebration exploded when the famed singer/songwriter Lyle Lovett and his Large Band took the stage for a swinging hour-long concert. Lovett has a personal connection to the Games. A reining rider and quarter horse breeder, Lovett owns Smart and Shiney, one of the world-class reining horses that competed on the Italian reining team.

In addition to the official closing ceremony, earlier in the day exhibitors, clinicians and breed associations who have been performing at the Equine Village throughout the Games had a finale of their own. The program included breed exhibitions like the awesome Irish draughts, a delightful presentation of miniature horses and thrilling performances by clinicians like stunt rider Tommie Turvey. 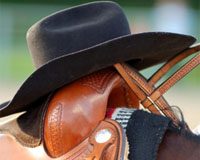