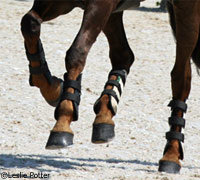 The Washington International Horse Show (WIHS) in Washington, D.C., presents a challenge that few other competitions face. Each year, this prestigious, year-end hunter/jumper show must be built from scratch inside a major city’s sports arena. With this comes the difficult task of laying down new footing and ensuring that it is up to the standard demanded by internationally ranked riders and their horses.

“Hosting a horse show in the center of a major metropolitan city is very different form putting on a show in the country,” explains Eric Straus, WIHS Chief Executive Officer. “In the case of the WIHS, we must build an arena and bring in the footing.”

The night before the WIHS might feature a basketball game or rock concert. The next morning, there is an amazing transformation to one of the nation’s premiere equestrian competitions. The biggest test begins as the riders enter the ring and scrutinize the footing.

In the riders’ minds, there are key factors that come into play when deciding whether or not the footing is good enough. The horses must feel secure when they land after a fence or canter around the arena. Riders are also concerned with their horses’ comfort, both mentally and physically, and a horse’s soundness and performance have a lot to do with the footing.

Quality Control
While the staff at the WIHS place the horses’ safety at the top of their list, they also have to deal with the reality of quickly creating and dismantling an arena that includes stabling and reliable footing.

The footing at the WIHS is a mixture of limestone screenings. “We have a very small window to get the material in and out, so if we had to use what they have at a permanent facility, it would take too much time and require too much maintenance,” explains show manager David Distler. “We get the limestone screenings shipped in locally, and they are easy to maintain.”

“In the end, the quality of locally available footing is key,” adds Tony Hitchcock, WIHS chief operating officer and HITS, Inc., senior vice president. “Our recent tradition has been to purchase new footing and sell it at a discount to a local school or riding program, or donate it.” For example, in 2007, 700 tons of the lime sand footing valued at $14,500 was donated to the U.S. Mounted Park Police.

Special Delivery
Getting 700 tons of footing in and out of the Verizon Center in Washington, D.C. is logistically difficult. The police and fire departments and Homeland Security all have to approve the show’s plans, including the delivery of the footing. Since the WIHS takes over the streets surrounding the Verizon Center from Saturday at midnight until 6:30 a.m. the following Monday, it requires a police presence at the end of each closed street to help secure the roads and direct traffic.

“We must present our site, traffic and stabling plans to the Mayor’s Special Events Committee, which is operated under D.C. Homeland Security,” explains Straus. “All affected city agencies review the proposed plans, and will make comments for modification if needed.”

On the day before the show begins, approximately 15 to 20 trucks are lined up at the top of the loading ramp, ready to make their delivery, which adds to the traffic congestion. It takes about 45 truckloads and eight hours to bring in all the footing for both the main arena and the indoor schooling area.

Once in the arena, the footing has to be unloaded and spread. Some of this is done by tractor, but manual help is also necessary.

“If it needs it, we wet the footing down as it goes in,” says Distler. “It has to be moist in order to not create a dust bowl. Once the trucks are gone and the arena is quiet for a few minutes, only those who were present know how much effort was put into creating this fine art of footing.”

When the first horse enters the Verizon Center for the WIHS, there is carefully installed and maintained footing for approximately 500 competitors from all over North America.