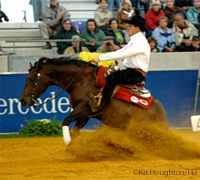 More about the Show
The $1.9 million show features the NRHA Futurity – the premier event for three-year-old reining horses. At the end of the Open Finals on Saturday, December 4, one entry is guaranteed a check for $125,000 as well as a whole host of incredible prizes from NRHA Corporate Partners and other award sponsors. The Cinch/NRHA Non Pro Futurity offers an additional $105,000 in added money for non pro reiners.

Must See Events
Now – Saturday, December 4 – The Adequan® North American Affiliate Championships (NAAC) is the culmination of a year of grueling competition for NRHA reiners across the U.S., Canada and Mexico. Riders must first qualify at their affiliate circuit shows. The top ten in each division advance to one of eleven Regional Affiliate Finals events. The top eight riders, plus ties, in each division at the Regional Affiliate Finals are invited to compete in the NAAC to see who the best reiners on the continent are. In addition, NRHA Corporate Partner SmartPak will present $2,500, custom awards jackets and the 2010 Adequan® NAAC Team Championship to the top point-earning region at this year’s NAAC. Admission and parking are free to watch NAAC competition in the Adequan® Championship Arena.

Thursday, December 2 at 7:30 p.m. – More than 30 entries have been received for the inaugural $100,000 added NRHA Open World Championship Shootout. The Shootout, sponsored by Equine Sports Medicine and Kyle Tack, is an “Open-to-the-World” class where the top Open reining horses on the planet will compete in a dramatic showdown for the winner’s estimated purse of $30,000. In addition, the 2010 NRHA Open World Champion will be recognized and honored at the show – even though the World Champion and the Shootout winner may not be the same. General admission day passes for Thursday are only $8.

Friday, December 3 at 6 p.m. – The 4R Performance Horses Celebrity Slide, benefiting the Make-A-Wish Foundation of Oklahoma®, brings some of the world’s greatest bull riders and celebrities to the reining arena. The following celebrities are taking time from their busy schedules to help some of their most ardent fans and the local chapter of the largest wish-granting organization for children: Shawn Michaels (World Wrestling Entertainment alum), Natalia Estrada (model and actress), G.R. Carter, Jr. (eight-time American Quarter Horse World Champion jockey), Christi Proctor (television host formerly of TLC’s Trading Spaces), Kristin Dickerson (Tulsa News Channel 8 Morning anchor), J.W. Hart (Professional Bull Riders Ring of Honor inductee), Paulo Crimber (10-time qualifier to the PBR World Finals) and Sgt. Danny New (representing U.S. armed forces). The celebrities will receive personal training from an all-star line up of NRHA Million Dollar Riders, NRHA Professionals and their young friends from Make-A-Wish. Tickets for the Celebrity Slide are $8 and can be purchased in advance at nrha.com. Avid bull-riding fans who want a chance to meet their favorite bull rider “up close and personal” can attend a VIP Reception at the conclusion of the competition. Tickets to the VIP event may be purchased from the Foundation by contacting RHSF at 405-946-7400 tickets are $75 each or two for $125 (limited tickets available). Enjoy good food, music and fun as we auction off high end items that benefit both foundations.

Go to nrhafuturity.com for more information or to purchase tickets.