California girl Zenyatta left her sunny home track, Hollywood Park this week to arrive at a snowy scene and sub-freezing temperatures at her new home in central Kentucky.

Zenyatta was loaded onto a plane on Monday and arrived in Lexington, Kentucky around 6:00 p.m. She and Smith, Shirreffs, Espinoza and the Mosses made an appearance at Keeneland Race Course for hundreds of admirers who had come out in spite of the bitter cold to catch a glimpse of the great mare. She was led around the show ring behind Keeneland’s sales pavilion, the same venue where the Mosses purchased her as a yearling five years ago.

Nick Nicholson, president of Keeneland, presented the Mosses with some special treats for Zenyatta, including carrots, pears and a few pints of Guinness.

With 19 consecutive wins, Zenyatta shattered the record for most consecutive wins and won the 2009 Breeder’s Cup Classic, becoming the first mare to do so. Her spectacular career and charisma drew throngs of fans from outside Thoroughbred racing’s notoriously shrinking pool of loyal followers. Although she missed the 2009 Horse of the Year title to Rachel Alexandra, she is a likely candidate for this year’s award.

Zenyatta will be moving on to a relatively quiet career as a broodmare at Lane’s End Farm in Versailles, Kentucky. According to ESPN.com, she will be bred in 2011, but the identity of the chosen stallion still remains the subject of much speculation. 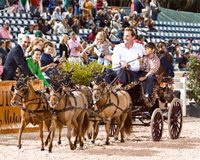