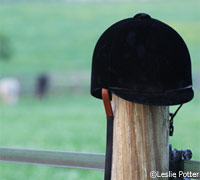 The timing of the riders4helmets Helmet Safety Symposium presented by SUCCEED® Digestive
Conditioning Program® to be held Jan. 8th in Wellington, FL could not be better. The United States
Equestrian Federation (USEF) is due to vote on proposed helmet rule changes at the USEF Annual
Convention Jan. 13-17th in Lexington, Kentucky.

The proposed USEF rules would require everyone under the age of 18 and everyone showing fourth
level or lower in dressage to wear a helmet whenever mounted at a showgrounds. This will be the
first time that a proposed rule for helmet use in dressage will have gone to vote and there has
been a mixed responses to its proposal. Some riders do not feel the ruling goes far enough and
they say that it ignores the upper level riders who many consider should be the ultimate role
models to the youth in the sport, while others feel that it should be a rider’s choice to wear a
helmet or not.

David O’Connor, USEF President and John Long, USEF Chief Executive Officer will both be attending
the helmet safety symposium. O’Connor aired his views regarding helmets at the December USDF
Annual Convention in Jacksonville, FL. “I applaud all you guys for taking a step,” he said.
“Eventers don’t think about it anymore, it’s just the way it is. This is going to happen, by the
way, whether you do it now or later. It’s going to happen in the FEI world, too. To take this step
is very important and a huge direction of change.”

Chair of the symposium, Craig Ferrell M.D notes, “Head injuries in sports are getting increasing
attention. As FEI medical chairman and US team physician, my goal is to make equestrian sports
safer. I believe this can be accomplished without changing the character of competition” he said.
“This symposium is being held to Increase awareness of the risks and promote rules that increase
helmet use in equestrian sport. There will be several presentations designed to review current
helmet designs and testing standards. With this gathering of influential leaders in equestrian
sports, I am hopeful we can guide improvements in helmet rules, helmet design, and helmet testing
standards.”

The symposium is being sponsored by SUCCEED® Digestive Conditioning Program®, Troxel Helmets,
Charles Owen, GPA, Tipperary Helmets and Samshield Helmets. For more information on the
Riders4Helmets campaign or the Helmet Safety Symposium, visit www.riders4helmets.com or contact
Lyndsey White at lwhite@freedomhealthllc.com.

Riders4Helmets was founded in early 2010 after Olympic dressage rider Courtney King Dye was
seriously injured in a riding accident. King Dye, who remained in a coma for a month following her
accident, was not wearing a helmet at the time of the accident and is currently undergoing
rehabilitation. Jeri Bryant donated her helmet campaign t-shirts (featuring the slogan “Strap One
On –Everyone’s Doing it”) to SUCCEED’s eBay store to raise funds for King Dye, and a partnership
was formed, resulting in the Riders4Helmets campaign.

Featured Videos: When Your Camera Crew is a Horse