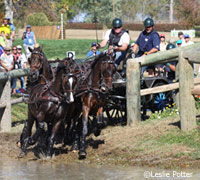 The United States Equestrian Team Foundation is pleased to announce that Combined Drivers Tucker S. Johnson of Hobe Sound, Florida, is the recipient of the 2011 Whitney Stone Cup. The award is presented annually to an active competitor who displays consistent excellence in international competition and high standards of sportsmanlike conduct while serving as an ambassador for the United States and equestrian sport. Johnson is a tremendously accomplished driver who helped lead the United States to a Team Silver Medal as well as receiving an Individual Bronze Medal during the 2010 Alltech FEI World Equestrian Games.

This is the second year that Johnson has received the Whitney Stone Cup, after being awarded the prestigious honor in 2001. Johnson now plans to retire from the competitive sport as he spent 2010 achieving many milestones. Along with other achievements, Johnson guided his Four-In-Hand team to a second place finish at the Land Rover International Driving Grand Prix at the Royal Windsor Horse Show in May.

After helping the United States win a Team Silver Medal at the 2002 World Equestrian Games, Johnson went on to a repeat performance at the 2010 Alltech FEI World Equestrian Games in Lexington, Kentucky. He was a member of the Silver Medal Team and after earning a 150.06 over the three phases of competition he took home the Individual Bronze Medal, achieving his personal best at a World Championship event.

“It feels great to be recognized; for the Whitney Stone Award to go to a driver from a non-Olympic discipline is a real treat,” noted Johnson. “It’s especially meaningful for me as I am at the end of my competitive career and was fortunate enough, with the help of the USET Foundation, to go to enough competitions that I could end on a high note.”

Johnson added, “At the World Equestrian Games I think that was the best I could do, and to have that happen at my last competition and contribute to a Team Silver Medal was fantastic.”

The presentation of this prestigious honor will be made at the USET Foundation Reception on January 28th, in Wellington, FL.

The Whitney Stone Cup is awarded in honor of the late Whitney Stone, who served as President and Chairman of the Board of the United States Equestrian Team from 1953 to 1973. Mr. Stone was instrumental in the creation of a civilian equestrian team when the Army retired from competitive horse sports after 1948. Previous Whitney Stone Cup winners are: